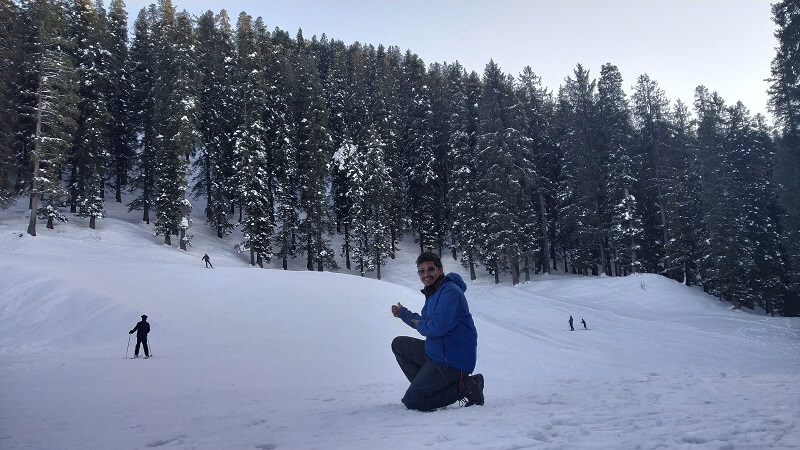 How many of you have been to Himachal and which all places did you visit on your trip to the state? Most of you may have visited Shimla, Manali, Dharamshala, Kasauli, Kufri, Kasol, Dalhousie…Isn’t it? Have you heard of Narkanda, Chail, Kalpa, Chitkul? Yes, they are a part of Himachal as well and are blessed with unparalleled natural beauty. So Abhi, how do you come to know about these off-beat destinations? 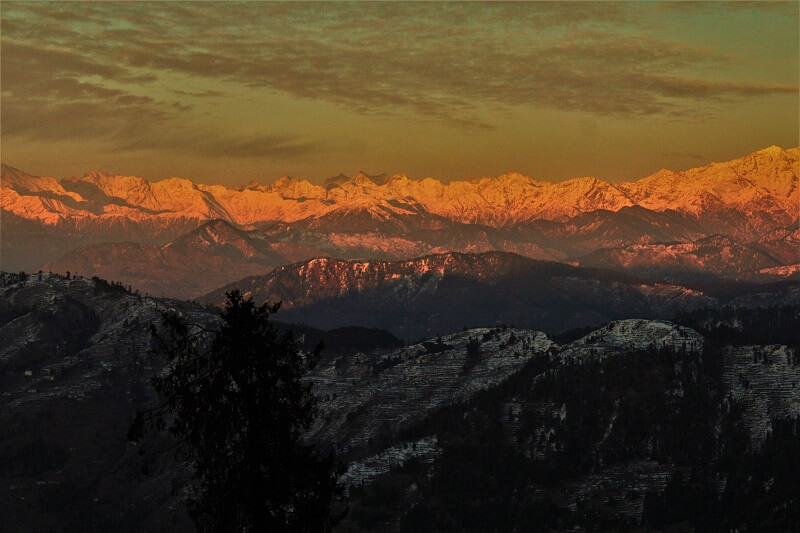 Sunset view at Narkanda in Winters

Over the years, a lot has changed on the way I travel. Earlier, I was more of searching for touristy hubs in India, but recently that isn’t the case. I don’t feel like visiting the overrated commercialized touristy spots anymore. And that’s when you add words like unexplored, hidden and offbeat to your search queries on google. 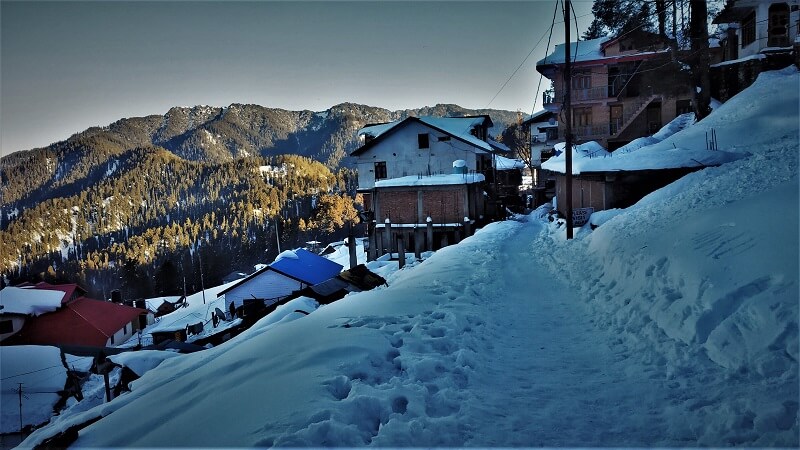 And the result of one such query of an offbeat place near Shimla brought me to this place named “Narkanda”. Located around 60 kms from Shimla, Narkanda stands at an elevation of around 2700 meters and provides marvelous views of snow cladded Himalayan range. In winters the entire town is coated with a thick sheet of snow and hence make it a popular skiing destination of India. 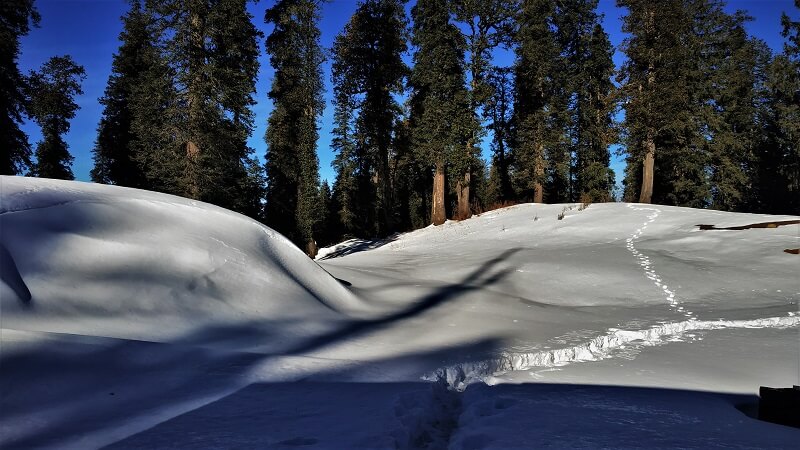 The trail to reach Hatu peak in Narkanda in Winters 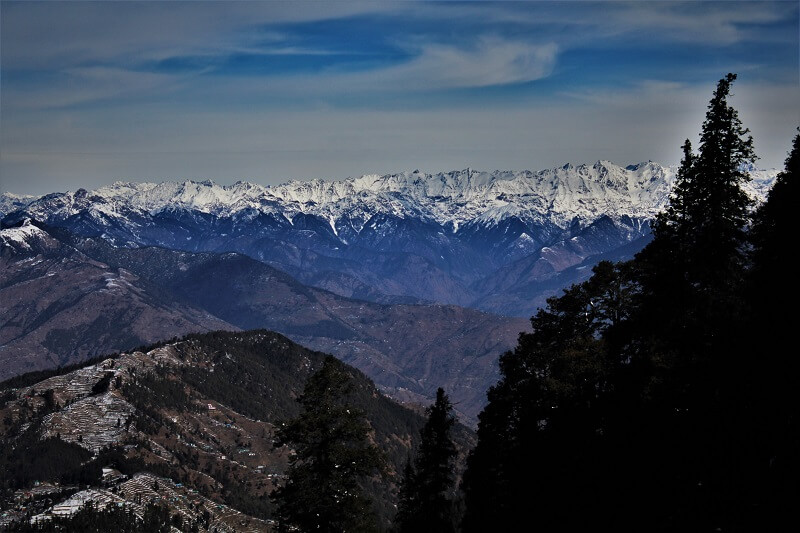 Himalayas as seen from Narkanda in winters

How to reach Narkanda in Himachal

Chandigarh is the nearest major railway station to Narkanda which is located at a distance of around 170 kms (6 hours). The distance between Delhi and Narkanda is around 400 kms (10 hours). Narkanda has direct connectivity to both these towns but frequency of buses will be low. The road towards Spiti and Kinnaur valley passes through Narkanda, so any bus going towards towns like Reckong Peo, Sangla, Rampur and Kaza will pass through Narkanda.

What I would suggest is to take a direct bus from Delhi/Chandigarh for Shimla and from Shimla, you can catch another bus for Narkanda (INR 114) which is a 2 hour drive. 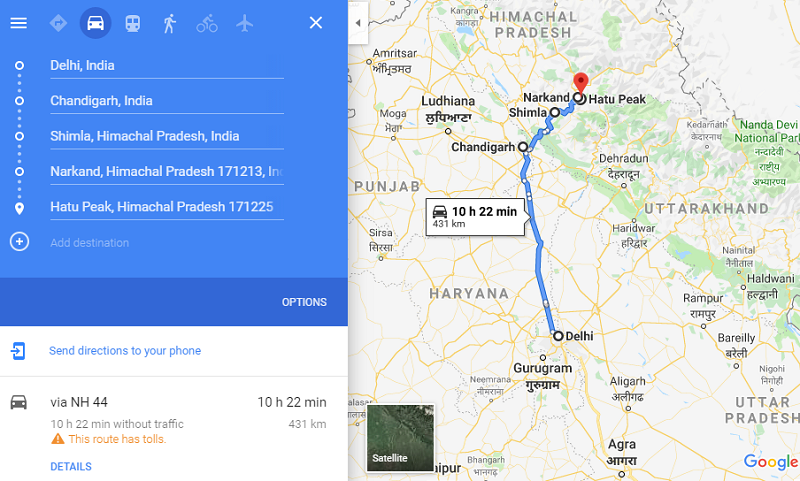 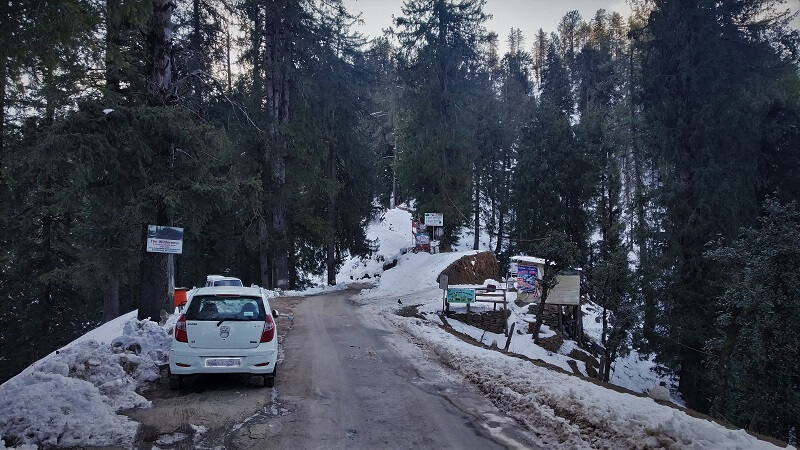 Getting around Narkanda in winters

The town is small and can be easily covered on foot. Hatu peak is one of the prime attractions in Narkanda. One can either drive or trek to make it to the top. But I would recommend you to trek all the way as it’s an amazing experience (7 kms – one way – 2 to 3 hours). Also, road route remains closed during winters due to heavy snowfall. To visit the TaniiJubbar Lake and nearby town Thanadhar, you can opt for shared taxi. 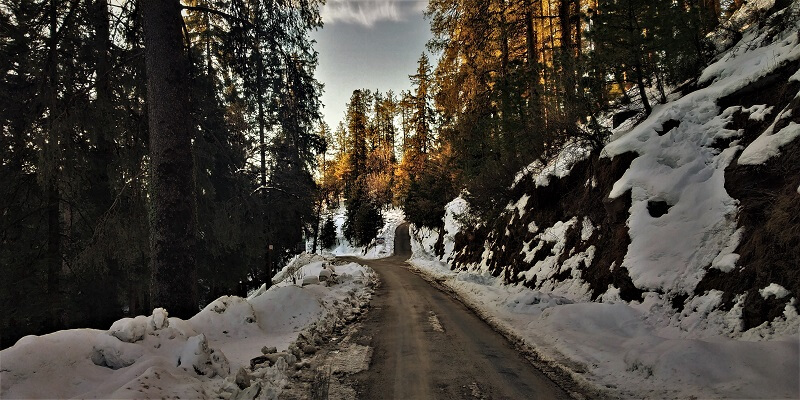 Roads at Narkanda in winters

My journey to Narkanda in winters

“The traveler sees what he sees, the tourist sees what he has come to see”. On my 20 days’ trip to Himachal, Narkanda was third on my list. After exploring the towns of Chail and Shimla, I headed for Narkanda.  From Shimla, regular transport is available for Narkanda and it takes around 2 hours to reach the same. 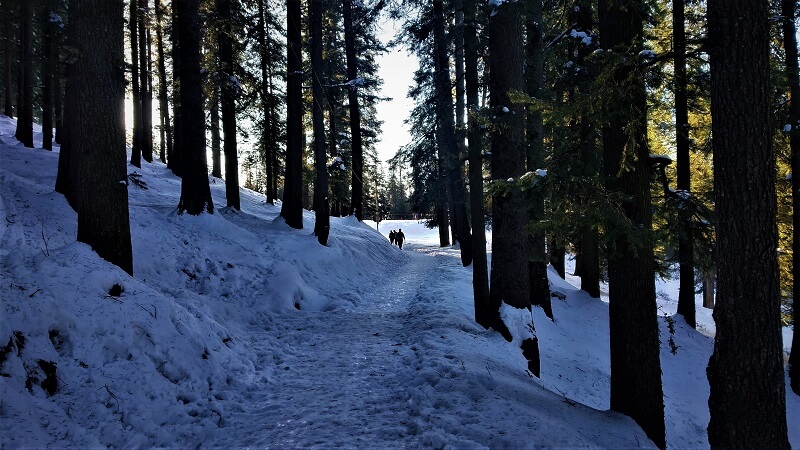 Forest covered with Snow at Narkanda in winters

The route passes through the popular hill station Kufri which remains crowded especially in the winter season. There were traffic jams near to Kufri and the 2-hour journey to reach Narkanda nearly took 3.5 hours. The route from Shimla to Narkanda is quite scenic, one can see the snow covered Himalayas at a distance. 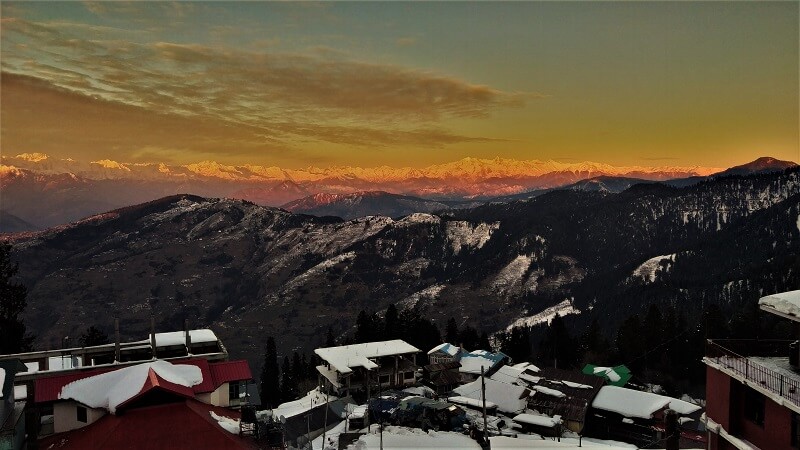 Sunset hues as seen from Hotel in Narkanda 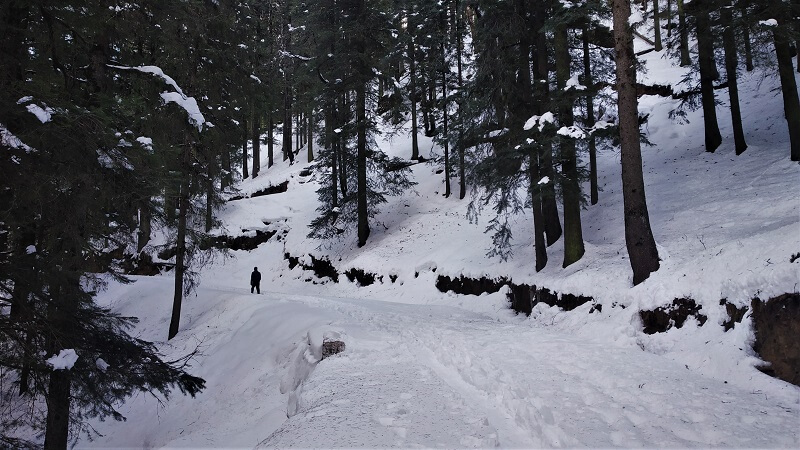 “Yes, this is what I was looking for”, I said to myself as I got the first glimpse of the majestic town Narkanda. A peaceful town with a Himalayan view!! The entire town was covered with a thick sheet of snow. Most of the hotels were closed due to extreme weather conditions, but I was lucky to get one. Almost all hotels at Narkanda provides a Himalayan view and it’s a delight to sit back, relax, have a cup of tea and adore the majestic views of snow- capped mountains.

Narkanda in winters is an absolute bliss. If you are adventure crazy, you must try hands at skiing. Some of the slopes are smooth and very steep, hence provides a different kind of skiing experience. I had done skiing previously at Solang valley in Manali so wasn’t much interested to do it again. What I was more interested is in capturing the views of the Himalayan range which had started to glow golden with the setting sun.

Skiing at Narkanda in Winters

The plan for next day was to visit the Hatu peak which is around 7 kms from the town. Standing at height of nearly 12,000 feet above sea level, the Hatu Peak is the highest peak in the entire Shimla district. Surrounded by majestic mountains and covered in a dense green blanket of sky touching cedar and fir, Hatu Peak trek is not to be missed on your visit to the town of Narkanda.

Me on way to Hatu peak top

There are 2 options to reach Hatu Peak top, one via road route and one via trek route. Due to heavy snowfall, both the routes were covered with deep snow. The only possibility was to try making it to the top via road route by trekking. The route passes through dense forest cover and walking through such surroundings is an absolute pleasure. 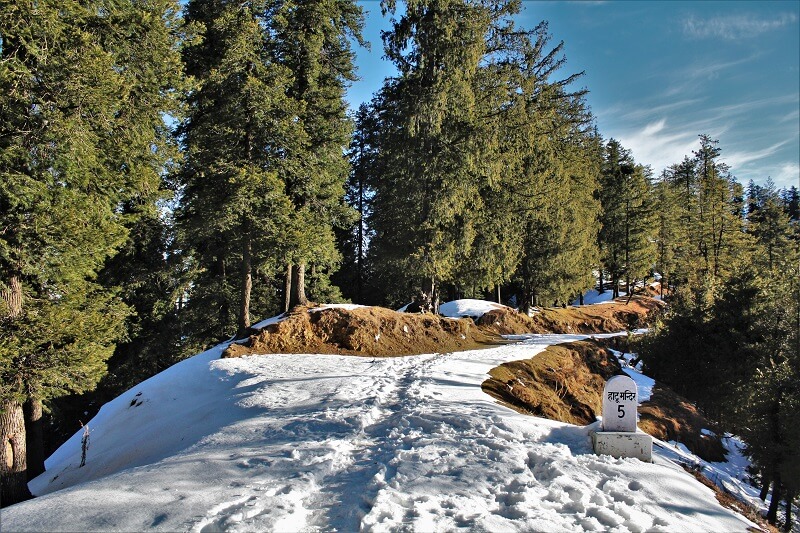 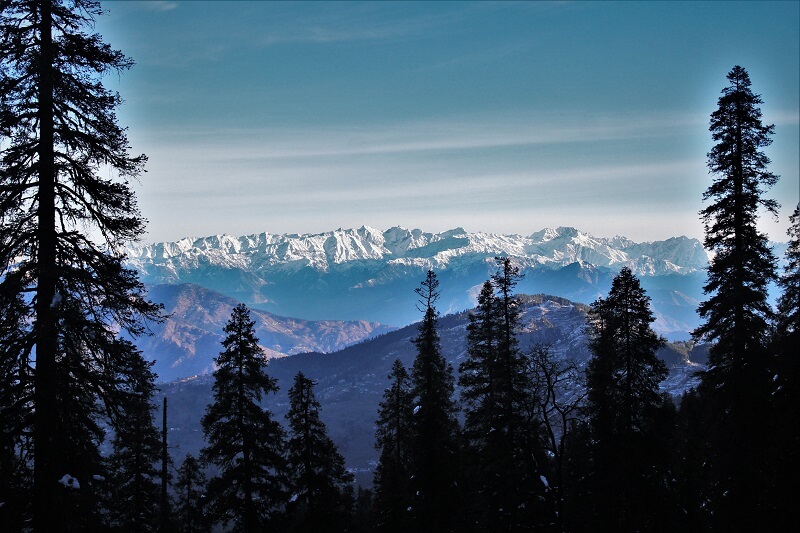 On way to Hatu Peak in Narkanda

There were foot-marks in the initial 2 kms of trail, the snow sheet was not that thick and I kept on following the same. It becomes easy to trek on those foot-marks as you need to put in less efforts. The views all around were just fabulous. As I moved further, the thickness of snow kept on increasing and it was becoming difficult to trek further ahead. 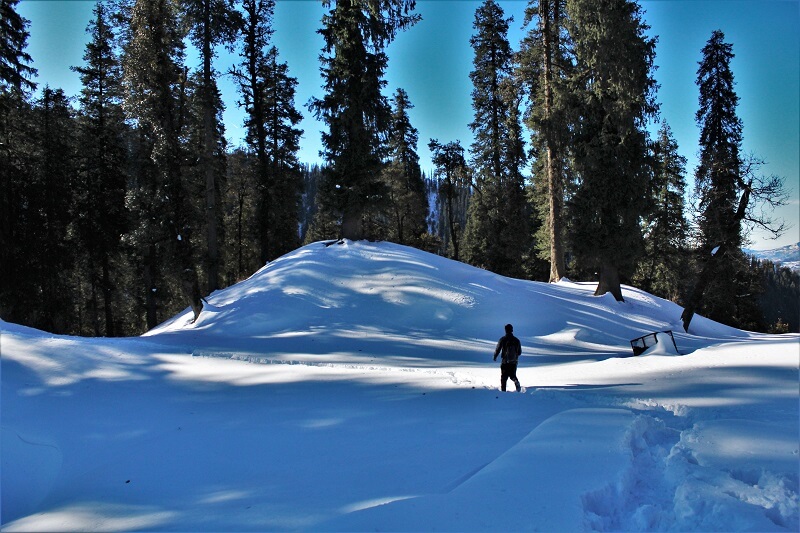 Snow covered Hatu peak road – Where is the road??

The snow covered trees, the snow covered peaks, the snow covered roads, there was snow everywhere. It seemed as if I was walking in a white wonderland. I was loving every bit of it. With just 1.5 km left for the Hatu Peak top, the foot-marks vanished. The road on which I was walking was buried almost with 3-4 feet of snow. It was really getting difficult to move forward. I was counting meters by meters in my mind as I was moving ahead but at one point I finally gave up. 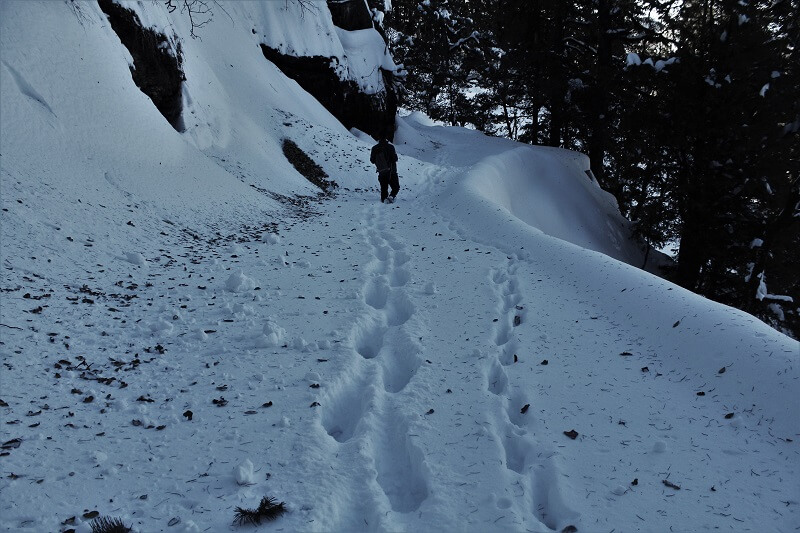 It was getting difficult to trek further ahead 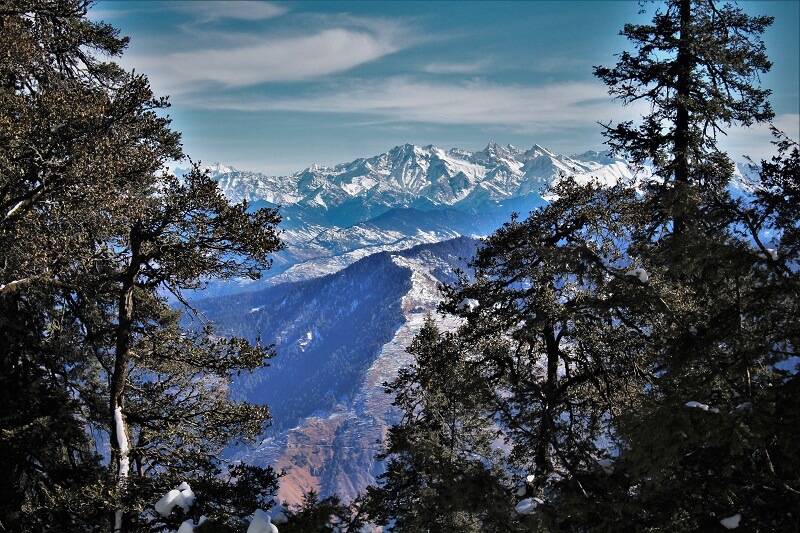 I was exhausted and didn’t wanted to risk my life. I decided to turn back. But, whatever I experienced on the trek was just out of this world. May be these photo I have posted won’t do justice to what I actually saw. 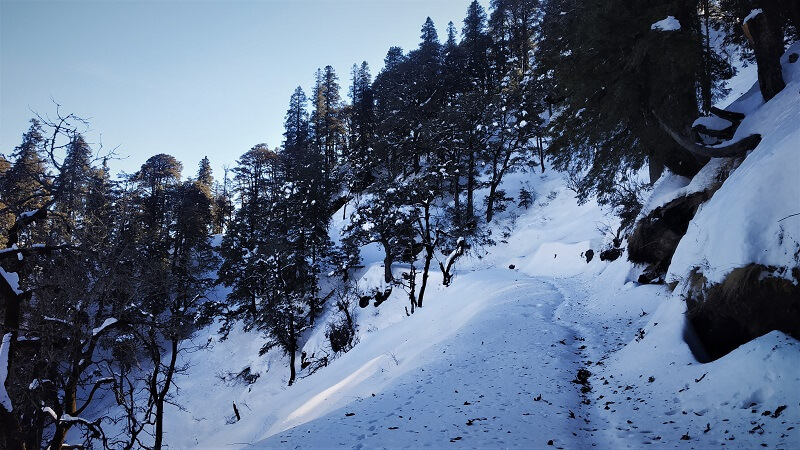 I just loved trekking over here

Apart from Skiing and visiting Hatu peak, one can visit the Tannu Jubbar Lake. Further ahead on the same route is the apple town “Thanadhar”, do visit the Strokes Farm over there. Higher reaches, plentiful summer sunshine or vibrant white winters in abundant apple orchards – all contribute to make Narkanda ‘the’ place to be. After spending 2 amazing days at Narkanda, I left for Sangla. 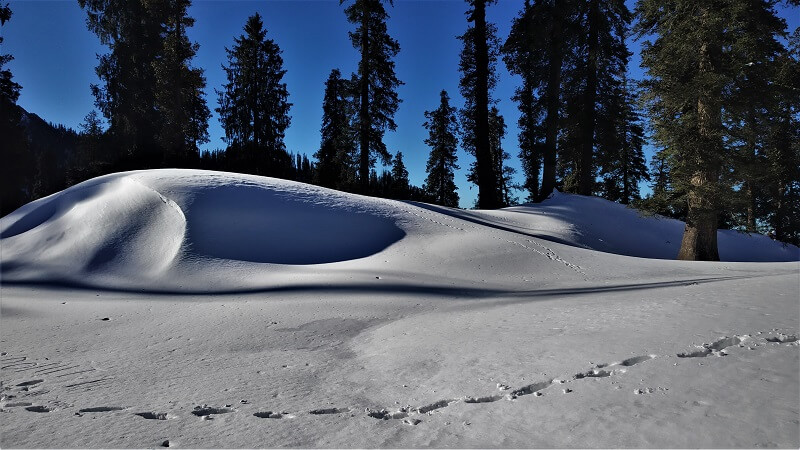 The foot-marks on Hatu peak trek 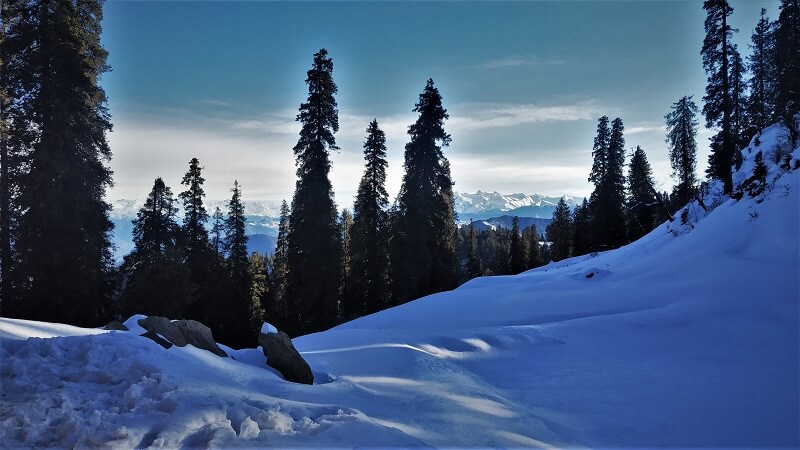 Himalayas in background as seen on Hatu peak trek in Narkanda

There are branches of SBI bank, UCO Bank, and HP State Co-operative bank in Narkanda. There is a petrol pump at Narkanda where you can buy fuel from. A medical facility is also available at Narkanda but bigger hospitals are at Shimla. The mobile connectivity is excellent in Narkanda and almost every mobile network works here. 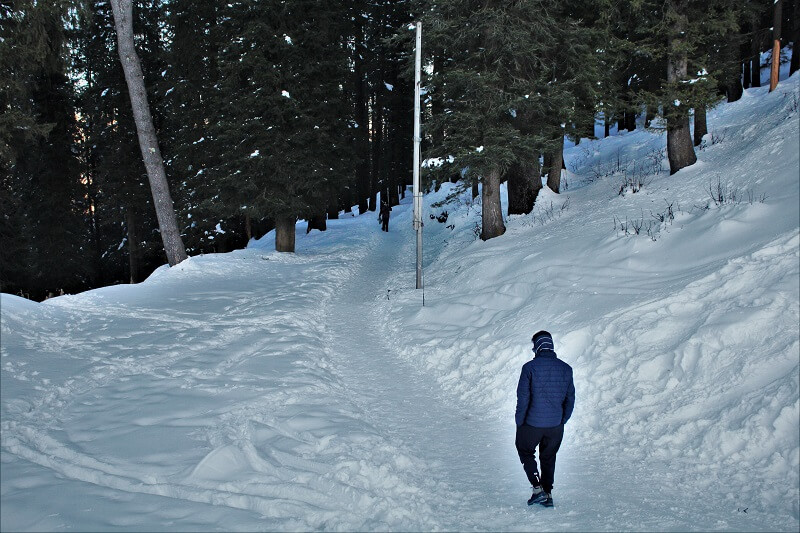 The best time to visit Narkanda entirely depends on what you want to experience. In the winter months (December – March), the town experiences snowfall and temperature dips below zero degree Celsius. In summer months, if you want to escape the scorching heat prevalent in other parts of the country, Narkanda is the perfect place to be at. Monsoon months of July and August bring rains to the region and landslides become common, so one needs to be extra cautious. 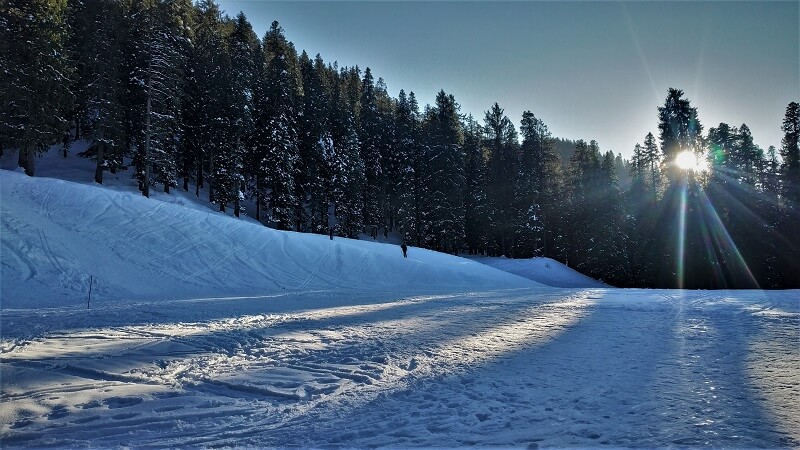 Skiing area at Narkanda in winters 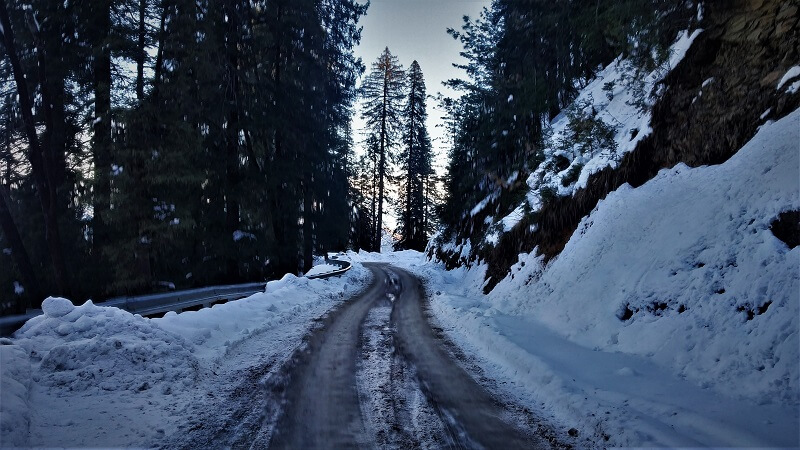 Food and stay options at Narkanda

In the winter season, most of the eat out joints remain closed and for food, you would have to entirely depend on the home-stay where you are staying. There are local shops where you can buy packed food items.

Most of the hotels/home-stays remain closed in the winter season, so you aren’t left with many choices. I stayed at Kainthala Guest House (Mob: Subhash- 9736287071) (INR 600 for 2 people) and would highly recommend it. The views of the mighty Himalayas from the terrace and rooms of this guest house are fabulous. 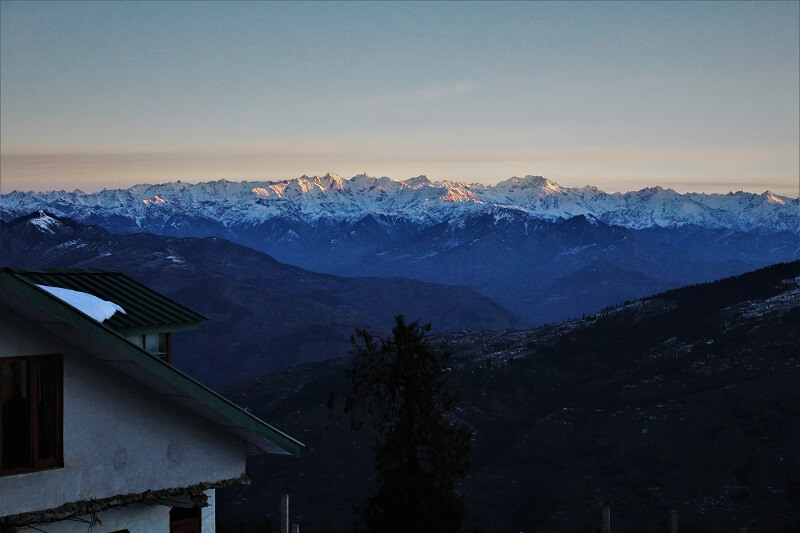 Everyone loves Shimla and Manali, and what’s not to like? But off-late, both these towns have gotten so populated and crowded that a trip here feels like you went from one city to another. Nothing against Shimla- Manali, but if you are looking for something offbeat, not so far, untouched and un-spoilt by tourism, Narkanda is the place to be at! 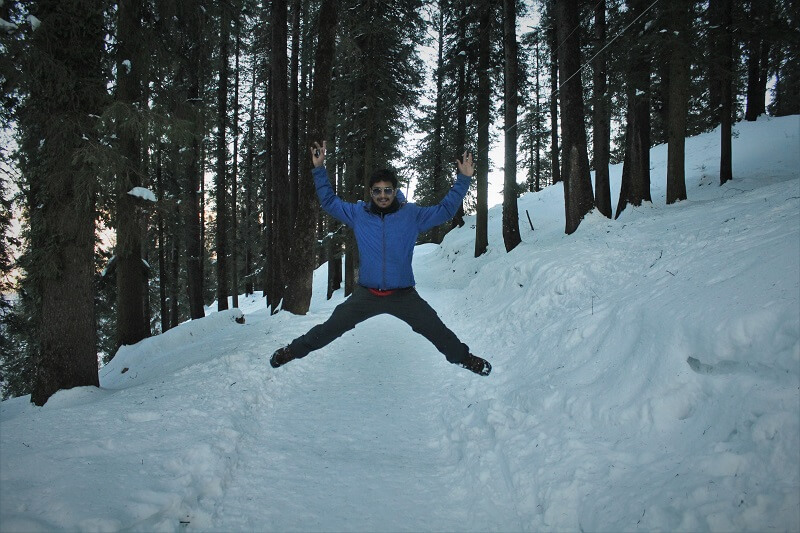 I used the following backpack during this trip and will highly recommend it. (Quechua Forclaz 60 Backpack) 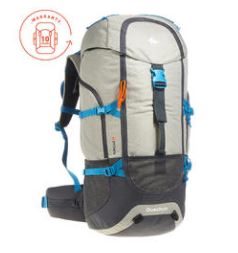 Hope you would have enjoyed reading this article/ travel guide on Narkanda in winters. To get regular updates on upcoming blog posts from On a Cheap Trip, please subscribe by entering your name and E-mail address in the Newsletter below. You can follow me on Facebook, Instagram, Pinterest as well as on Twitter.