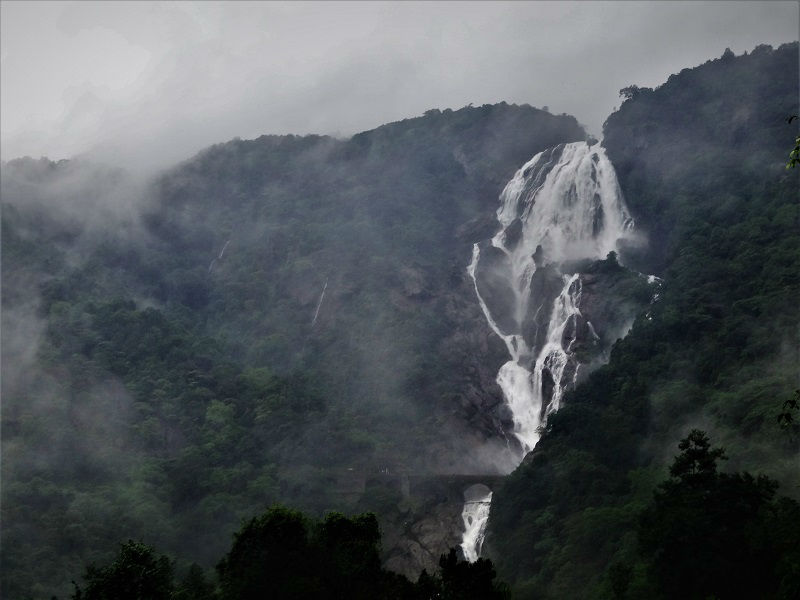 I remember in no particular order what I loved the most about my journey to Dudhsagar Waterfall Trek. Was it the air? Was it the foggy weather? Or, was it just the vibe and zest of witnessing something so magical? “Traveling is like flirting with life. It’s like saying, ‘I would stay and love you, but I have to go; this is my station”!! Abhi!! Aren’t you getting too poetic? Ha-ha!!

Located in the Sanguem Taluka of Goa, and also popular among the locals by Tambdi Surla, Dudhsagar Waterfall is one of India’s tallest waterfalls falling from a spectacular height of 310 meters. Originating at the Deccan Plateau in the state of Karnataka and winding its way through the Western Ghats, the river Mandovi plummets over the highest peaks thus forming the Dudhsagar waterfalls. 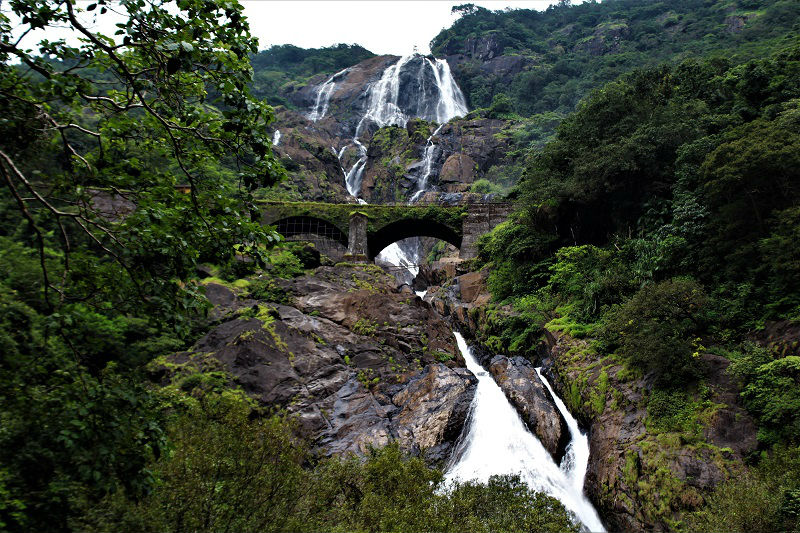 Dushsagar Waterfall as seen from the base

Doing justice to its name, Dudhsagar which means the Sea of Milk, when cascades from such height create an illusion as if someone is pouring gallons of milk from the top of a mountain. The milky water that flow with gush is a treat to eyes. The Dudhsagar Waterfall can definitely be counted in the list of the most beautiful Waterfalls in India.

The waterfall gained even more popularity among people after it got featured in scenes of the blockbuster Bollywood film ‘Chennai Express‘. The falls are at their zenith during the monsoon months of July to September, although they are a popular tourist attraction all year round. 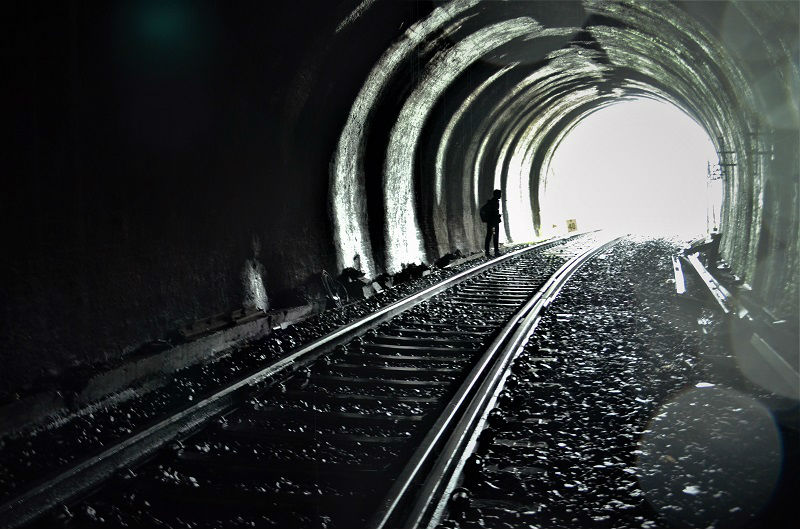 How to reach Dudhsagar Waterfall Trek base village

The cheapest and the most convenient way to reach Dudhsagar waterfall trek base village (Kulem) is via railways. Kulem railway station is very well connected to major Indian cities like New Delhi, Madgaon, Chennai, Pune, Howrah, Bhubaneswar, and Bhopal directly via railways. Catch a train from any of these cities which reaches Kulem in the early morning time. For train bookings, visit IRCTC.

If you are already in Goa, you can take Vasco – Kulem passenger train that runs every day or the VSG Howrah express to reach Kulem early morning. Don’t confuse Kulem by Kalem as they are different stations. Those who prefer bus journey over railways can take a bus to Kulem from Panaji/Madgaon. 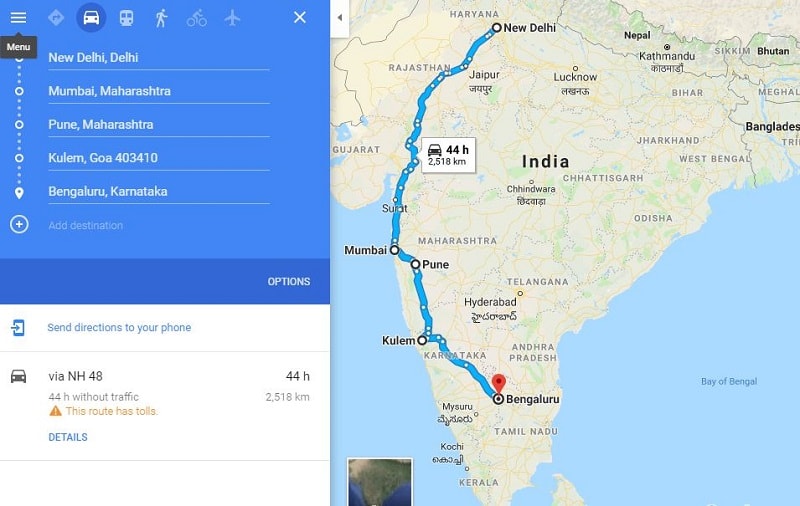 Owing to the tragic incidents in the recent past, there are various restrictions which have been implemented in the trekking routes of Dudhsagar waterfalls. Castle Rock trekking route to reach the Dudhsagar Waterfall has been permanently closed. One would be heavily fined if found trekking through this route along the railway tracks. 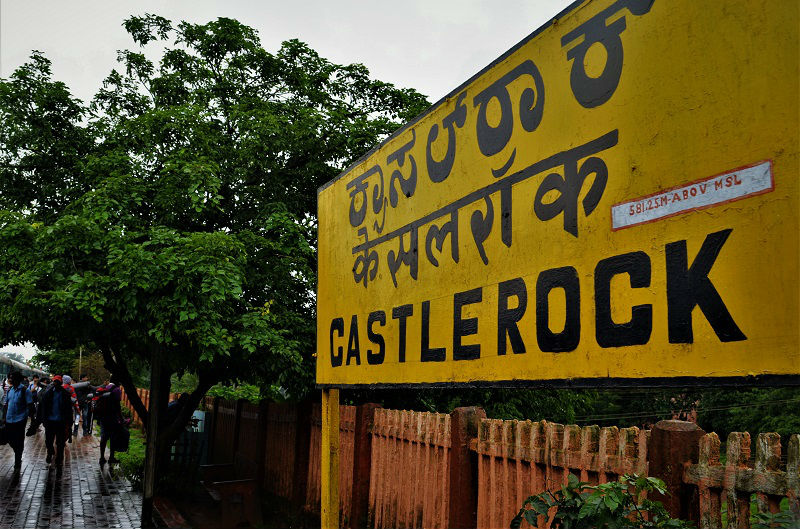 The only allowed trekking route is the Kulem- Dudhsagar route which is 12 kms one way. And, one needs to hire a compulsory guide if looking to trek through this route. The same can be hired from the Kulem village. Charges are around INR 3000 per guide which can take a group of 7-10 people. Also, no one is allowed on the bridge where exactly the Dudhsagar waterfall is located. 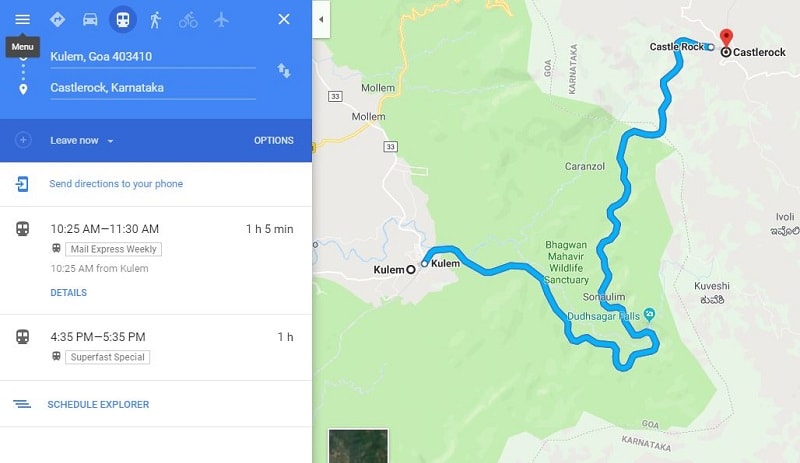 The other option to witness the beauty of Dudhsagar waterfall is taking the Jeep Safari from Kulem which is organized by the Goa Forest Department. The jeeps cover a distance of around 8-9 kms and drop you a few meters before the base of the waterfall. The jeep charges are INR 3500 for a maximum of 7 people and the camera charges are 50 INR.

Note: The jeep safari is closed in the monsoon months of June to September. It starts somewhere in the first week of October depending on rains. 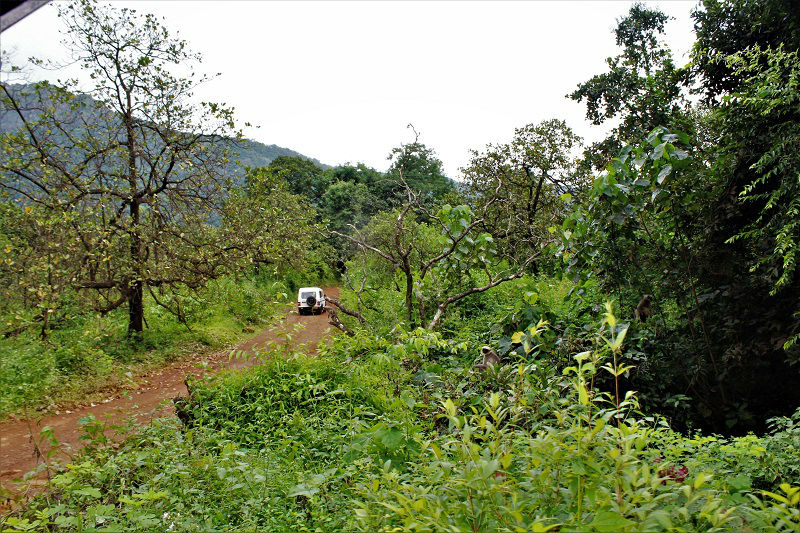 If you have no plans to visit the Dudhsagar falls separately, you can still experience the breathtaking views of this majestic waterfall from the train. You can put Dudhsagar Waterfall Camp Site on Gmaps to track how near your train is to the waterfall. 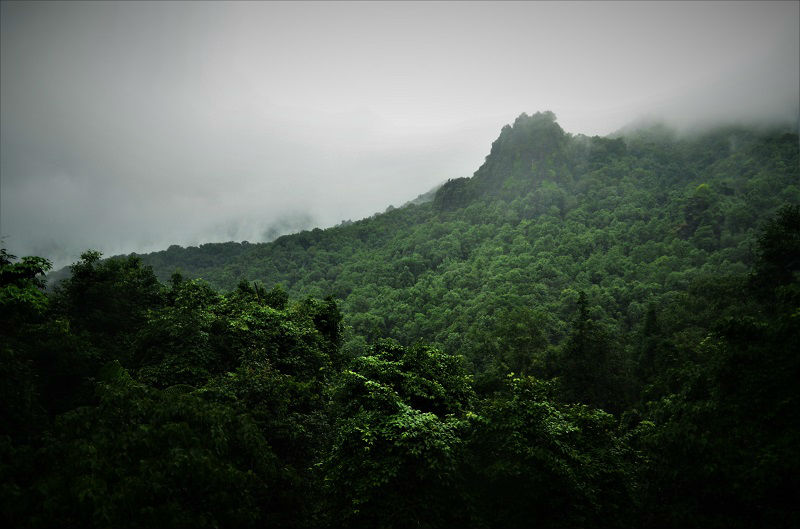 In terms of difficulty, I would rate Dudhsagar waterfall trek somewhere between easy to moderate level trek. The total distance between Kulem and Dudhsagar falls is around 12 kms and takes around 3-4 hours to reach the same. The trail is mostly flat with just a few uphill patches. 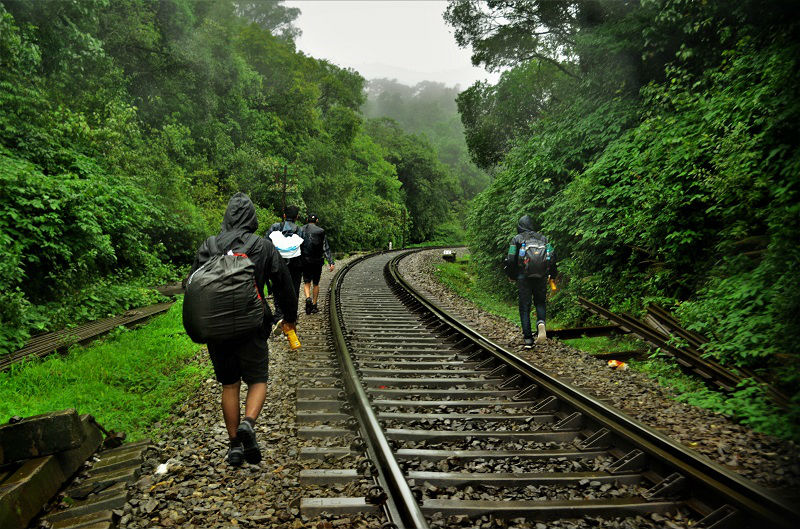 My Journey to Dudhsagar Waterfall

To be frank, on all my three visits to the touristy state of Goa before August 2013, I had never heard about the Dudhsagar waterfall. It was only when the famous Bollywood movie Chennai express was released that I came to know about this breathtaking waterfall. One of the scenes of the movie was shot with Dudhsagar Waterfall in the background. Looking at the beauty of the fall, I decided that it won’t be too long before I make a visit to this nature’s gift. 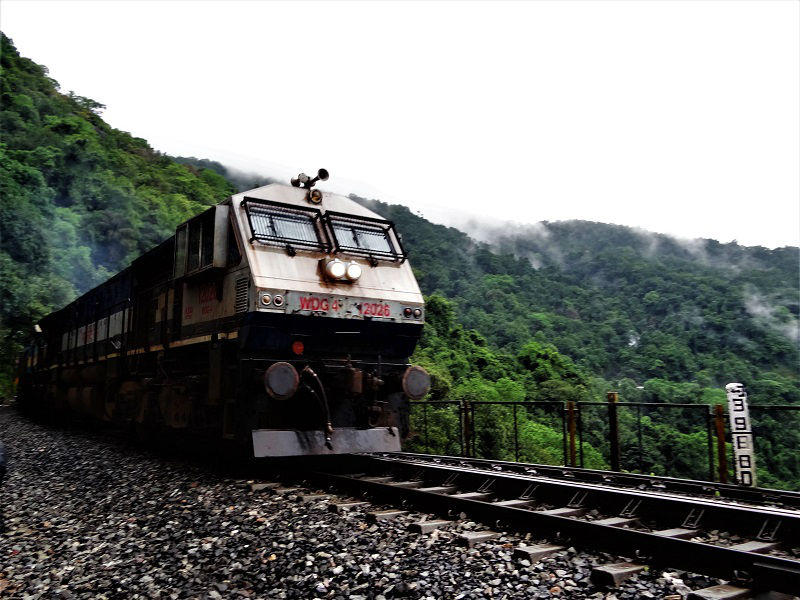 Finally, a year later in the month of September, I booked my tickets to reach Dudhsagar Waterfall base village. I boarded the Goa express from Pune which reaches Castle rock station around 3:00 am. I had planned to trek all along the railway track starting from Castle rock to Dudhsagar Fall and then toward Kulem to end the trek.

Note: There were no restrictions at all when I did my trek. Ban to trek through Castle rock station route has been implemented recently due to the mishaps in recent years. 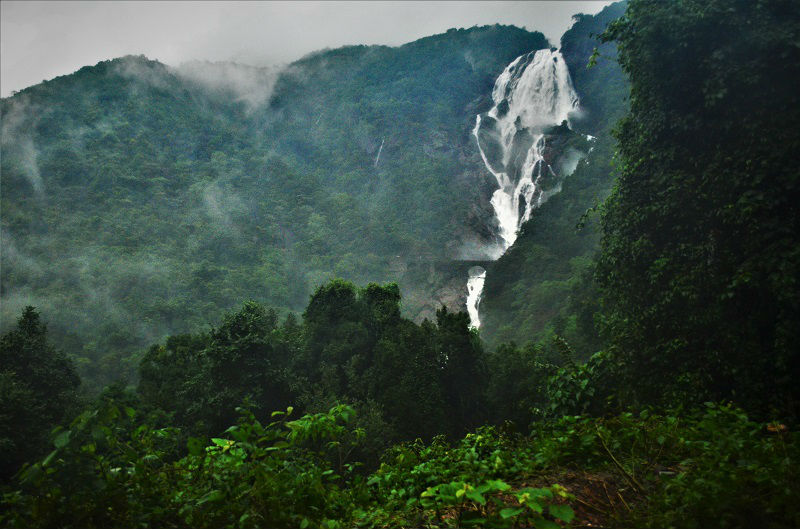 Dudhsagar Waterfall as seen on way to Kulem

The trek distance between the Castle rock station and Dudhsagar Waterfall is around 14 kms and takes around 5 hours one way to cover the distance. I decided to wait for the daylight to begin with my trek. The moment I started with my trek, it started raining very heavily. As I had a waterproof bag and a raincoat with me, I decided not to wait and carry on with the trek. 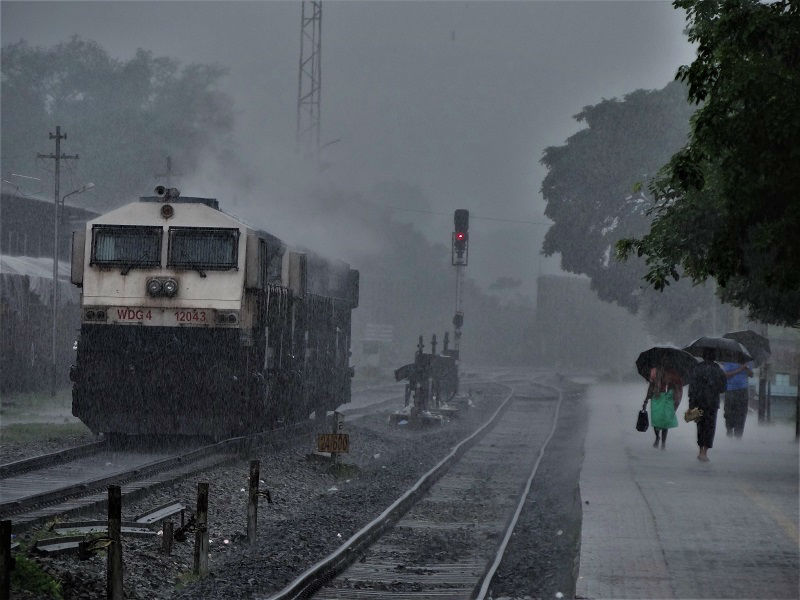 Heavy rains at the start of Dudhsagar Waterfall Trek

Within a few minutes, I was walking on the tracks surrounded by dense forest. Hiking along the tracks is not as easy as it seems. There are almost 11 tunnels which one need to cross before making it to the waterfall. Walking in those dark tunnels is enjoyable but one needs to be very careful as a train may pass by anytime. 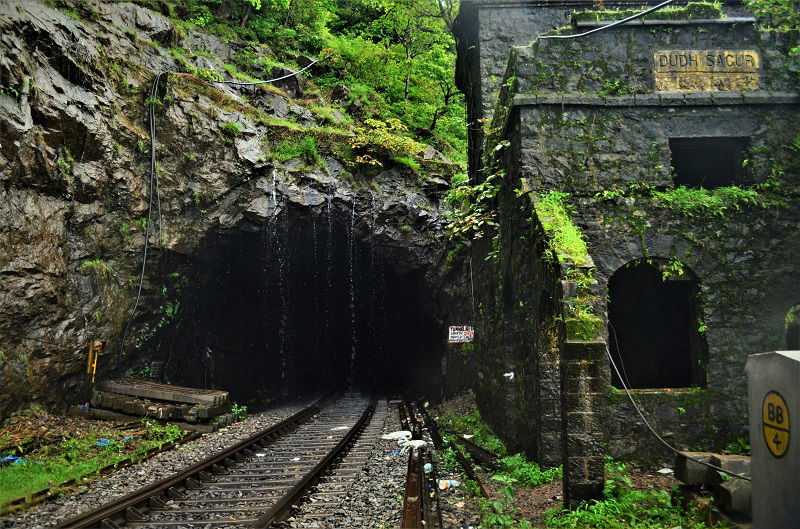 The views of the surroundings all along the way to Dudhsagar waterfall were just fabulous. I never felt like that it had almost been 4 hours since I was walking along the tracks. Finally, after crossing the 11th tunnel, I made it to the Dudhsagar Waterfall. There were literally tears in my eyes. Tear of watching something that magical. Due to ongoing heavy rains, the Dudhsagar fall was gushing with a full flow and everything seemed foggy. 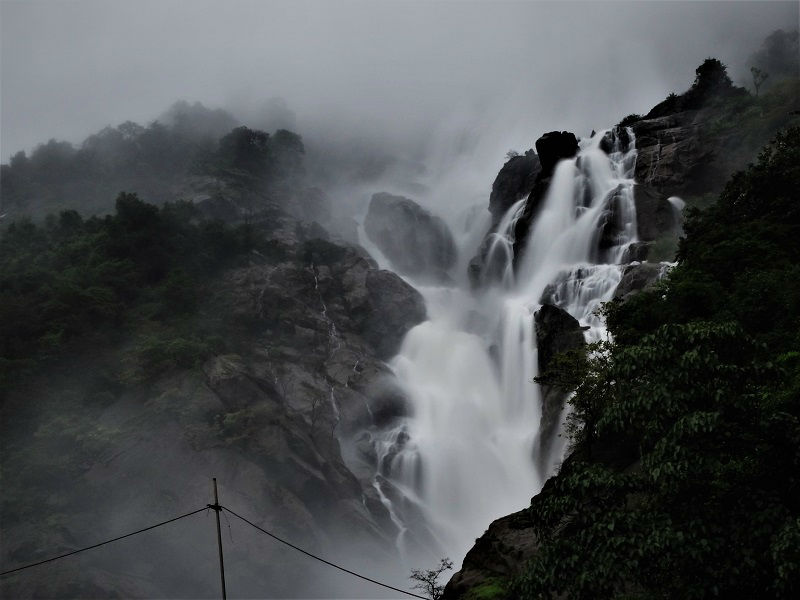 After witnessing this beauty from every possible angle, I started my journey towards Kulem. Once you pass the 12th and the 13th tunnel, there is a viewpoint of Dudhsagar waterfall. The view of the entire falls from this point is just spectacular. After walking for around 4 hours, I made it to the Kulem Station. I was tired after almost walking for around 10 hours  on the railway tracks but the overall experience of the trek kept my energy levels high. 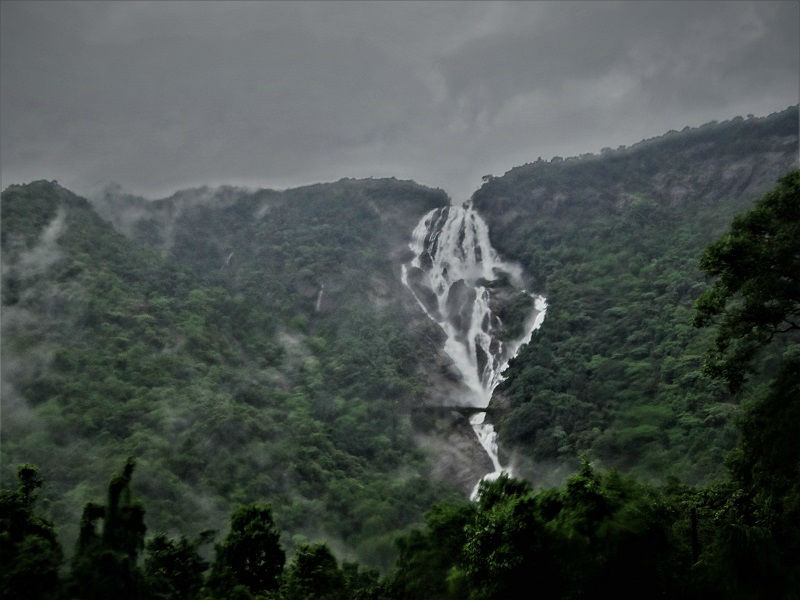 With all the delightful memories of the trek to Dudhsagar Waterfall two years ago, I was back here again in the year 2016. I combined it with my journey to Goa as I wanted to experience the taxi ride which takes to the base of the waterfall. The taxi ride which passes through dense jungle and few river crossings is an amazing experience in itself. One needs to walk a few meters to reach the base of the fall from where the taxi drops. 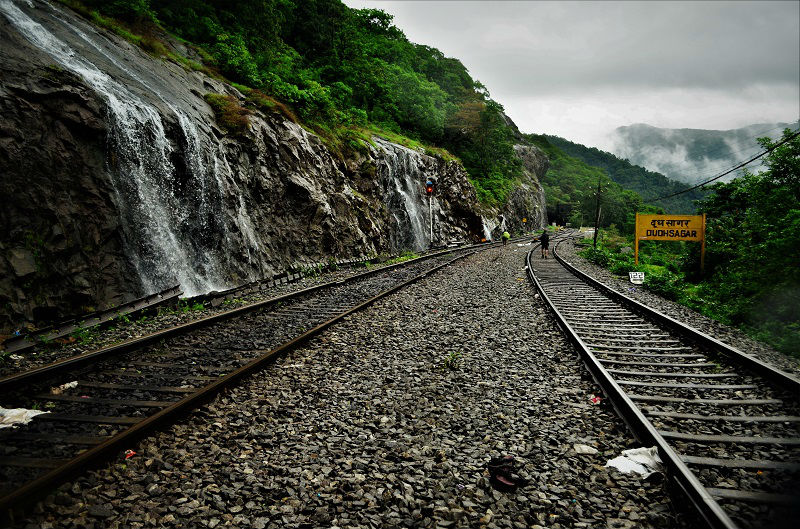 As the water from fall splash on your face, you will get a feeling that heaven is preaching you. That great heaven where one wishes to go after death is teaching its folk about kindness. It gives us an example of how even the great of greatest thing have to bow down to show and gain respect. With all the beautiful memories of the falls yet again, I left for Pune. 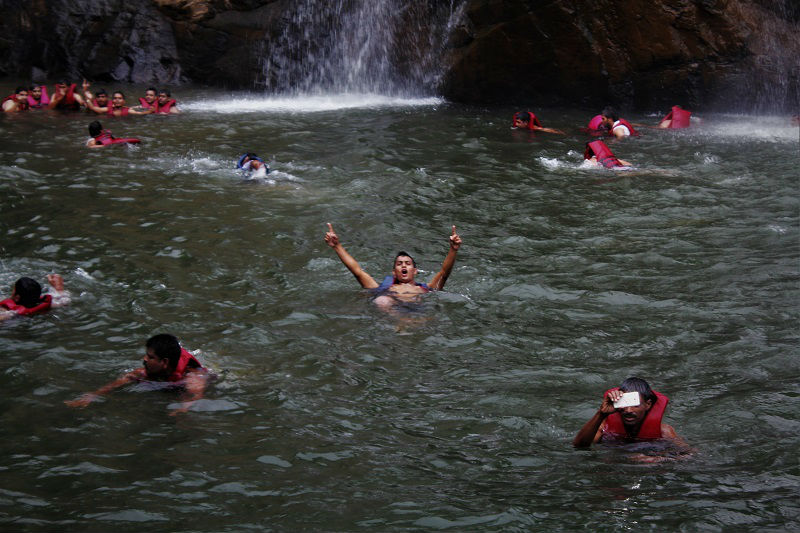 Enjoying in the pool at the base of Dudhsagar Waterfall

I would recommend one to avoid visiting the waterfalls in the monsoon months of July- September as lots of incidents have occurred during this span. Months of October to November is what I would highly recommend as the rains have just gone by leaving behind the lushest green surroundings and a moderate water flow level at the Dudhsagar Waterfall. 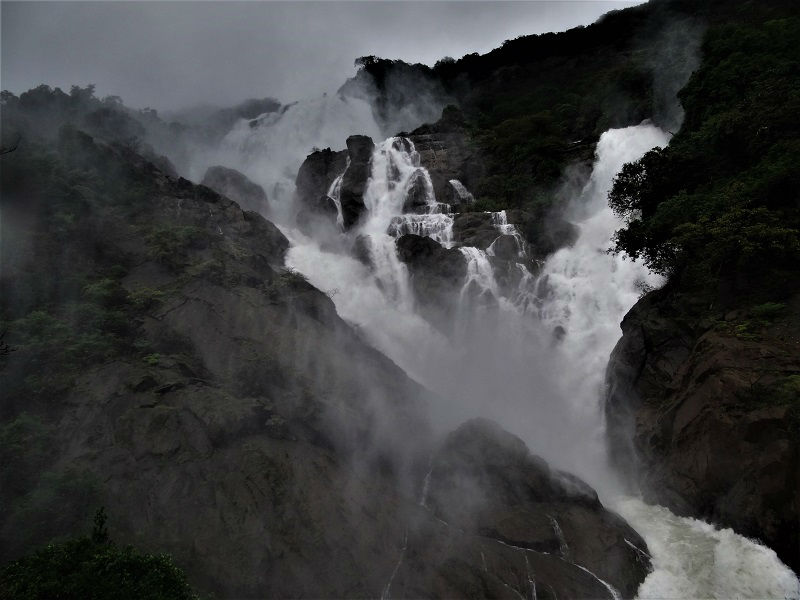 The stay options in the Dudhsagar region are limited and are mostly expensive. What I would recommend is to take a stay somewhere in Goa and plan to visit the falls on a day tour. For stay options in Goa, you can refer my earlier post: The Undiluted Essence of South Goa Soil. 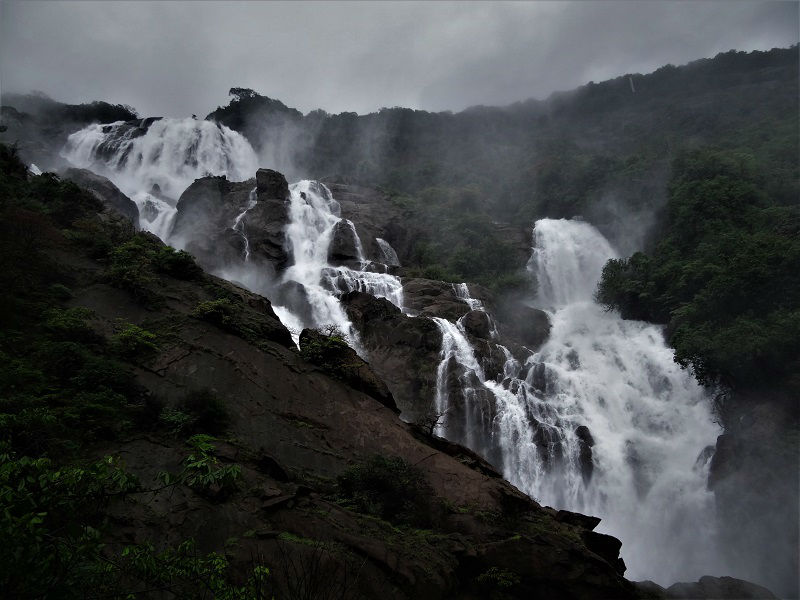 This journey was a mesmerizing one. You know I realized Goa was calling me, not for its beach, cuisine or night bazaar but to witness something eternally beautiful, something known as Dudhsagar Waterfall. My eyes smiled and I breathe with the feeling of being content. And as I inhaled the fragrance of that place for last time, heaven whispered ‘Do come again’.

“We travel initially to lose ourselves, and we travel, next to find ourselves.” – Pico Iyer 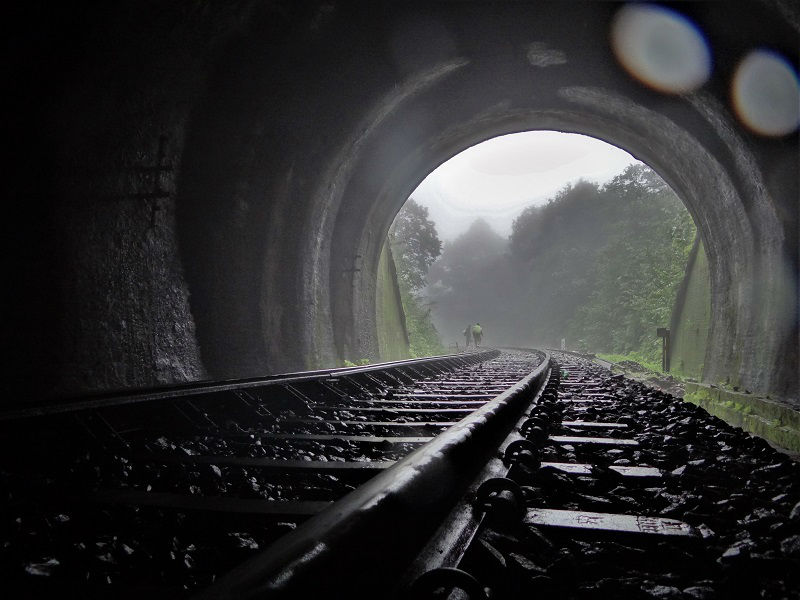 Looking for places to explore in South Goa, check out my post on The Undiluted Essence of South Goa Soil

Hope you would have enjoyed reading this article/travel guide on Dudhsagar Waterfall trek. To get regular updates on upcoming blog posts from On a Cheap Trip, please subscribe by entering your name and E-mail address in the Newsletter below. You can follow me on Facebook, Instagram, Pinterest as well as on Twitter.