I stretched out in the bottom of the boat and closed my eyes waiting for the rising tide to carry me where I belong. Hey Abhi, wake up!! You are finally at the Nashik City!! Yeah, finally after so many plans being getting canceled due to one or the other reason. Though being famous for its religious places, believe me, Nashik has a lot more to offer. The hills that surround the whole place. God!! I was literally like, Abhi are you dreaming? 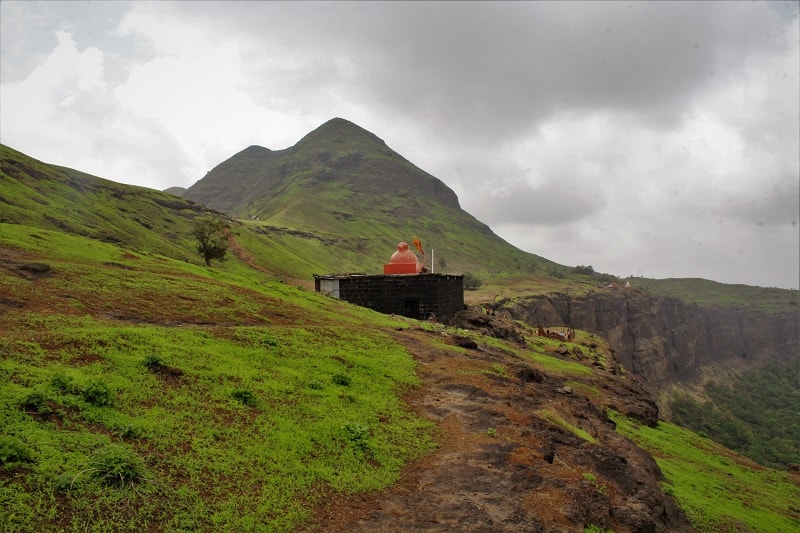 You know although I deeply love oceans, deserts, and other wild landscapes, it is only the mountains that beckons me with that sort of painful magnetic pull to walk deeper and deeper in their beauty. And, with so many huge mountains surrounding the beautiful Nashik city, the city turned out to be the perfect weekend gateway for me. 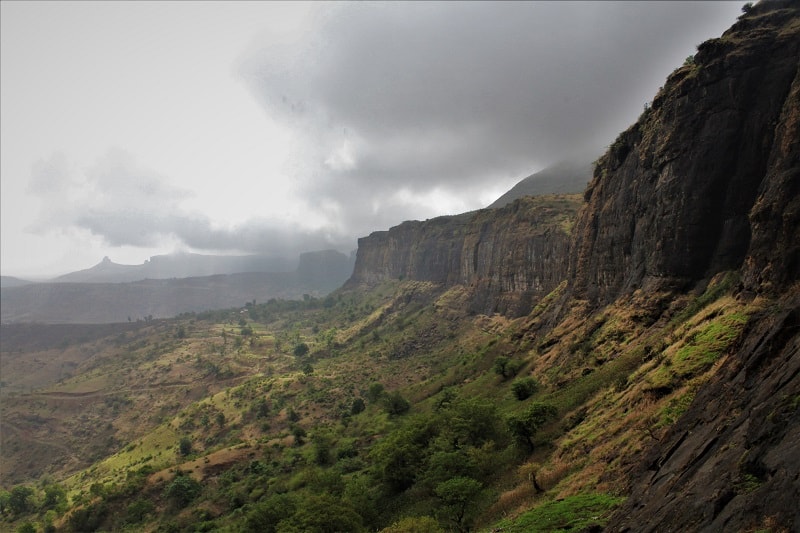 Situated on the bank of the sacred Godavari River, the air of the Nashik city carries an authentic spiritual feeling of being close to almighty. The city hosts one of the largest religious gatherings in the world known as Maha Kumbh which takes place every in twelve years. With Anjaneri hills (Birthplace of Lord Hanuman) and Trimbakeshwar Temple (one of the twelve Jyotirlingas) located so close to the town, a visit to the city will leave you spellbound. 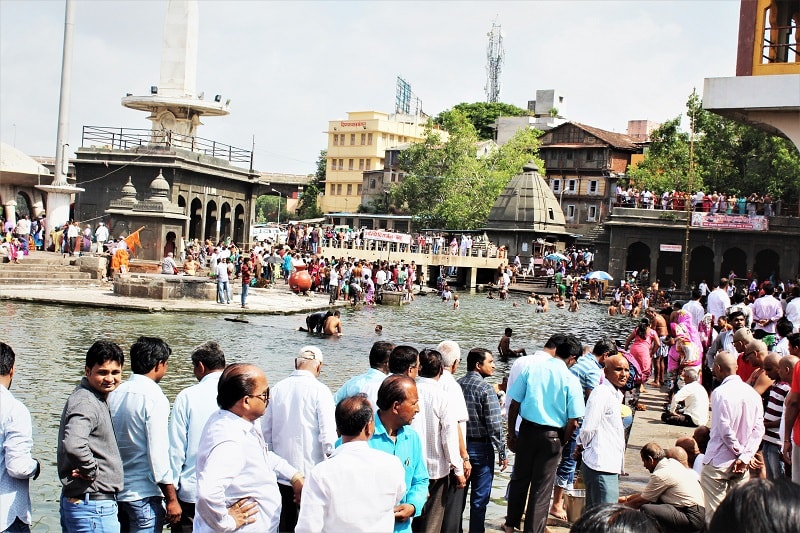 Ramkund near Panchvati in Nashik City

Have I missed something important about the city!! Oh yeah!! Having half of India’s vineyards and wineries, the city is also well known as the “Wine capital of India”. Taking a wine tour at the famous Sula vineyards can be the perfect way to put an end to a tiring trekking day. Abhi, do you take wine?? Hey, when did I say that…Ha-ha!! The entrance of Sula vineyards near Nashik city

How to reach Nashik city

The cheapest and the convenient way to reach Nashik city is via railways. Nashik is directly connected to major Indian cities like Mumbai, Bhopal, Delhi, Kanpur etc. via railways. For train bookings visit IRCTC.

Pune and Surat are not directly connected to Nashik via railways so better option will be to take a direct bus. The distance between Pune to Nashik city is approx. 210 kms and takes around 4-5 hours to cover the same. MSRTC operates Shivshahi buses between the two cities, the charges for the same are INR 410. Download the MSRTC app for the same. Otherwise, for other bus operators, you can check MakeMyTrip. 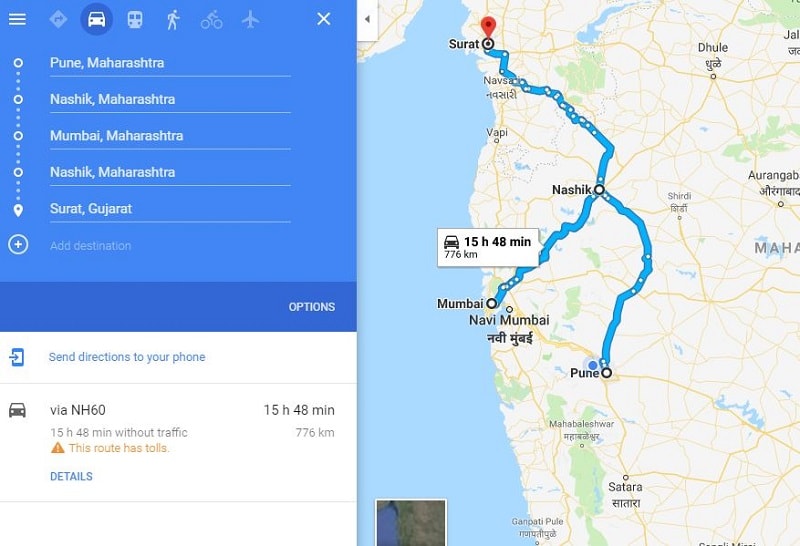 Getting around Nashik city

If you want to cover all the places of interest in Nashik and nearby, taking public transport won’t be a great option as frequency is quite low and a few spots of tourists interests are far from the usual bus routes and one will have to walk a lot (as was my case) to visit them. So I would recommend you to hire an Activa/bike from the Nashik city. For bike rentals, you may check out Kings Travel. (Activa -500 INR/day). My Journey to Nashik city

Being known as “Spiritual Capital of Maharashtra”, I was expecting nothing more than the temples as I boarded the bus for Nashik City from Pune at late night. The MSRTC Shivshahi buses are usually on time and at sharp 5:00 am, the bus dropped me at Nashik bus station. I had planned 2 days to explore the temple city; first day for Trimbakeshwar temple and its nearby places and the second for the main Nashik city and the Sula vineyards. This is how I traversed exploring most of the must-see places of Nashik city and its nearby spots of attraction.

As soon as the bus dropped me at the bus stop, I took another bus (CBS bus stand) for the Trimbakeshwar Temple (30 kms – 33 INR). The first look at the temple left me flabbergasted. With cloudy mountains surrounding the temple from most sides and the temple being at the middle, the views were just spectacular. I was astounded to experience something so magical. Trimbakeshwar is ancient Hindu temple dedicated to God Shiva and is one amongst the twelve Jyotirlingas. After taking blessings at the beautiful temple, I started the trek to Brahmagiri hill which is situated just at the backside of the temple. Though the trek is a bit long (2-3 hours –  approx. 1000 stairs) and tiring, the views all along the way will keep you motivated to make it to the top. A tree on the Brahmagiri hill is believed to be the origin of the Godavari river. Sitting nearby that tree and watching the lush green surroundings in the adjacent valleys was a moment I will cheer for entire life. The top of the hill was a bit cloudy and the cool wind was flowing at a brisk pace. All the tiredness was gone owing to such an amazing experience.

Next on my list was the popular Anjaneri Fort which is believed to be the birthplace of Lord Hanuman. I took a bus from Trimbakeshwar which goes toward Nashik city and asked the driver to drop me at the Anjaneri which is on the same route. After taking blessings at the Hanuman temple which is at the roadside of Anjaneri, I started with my trek. 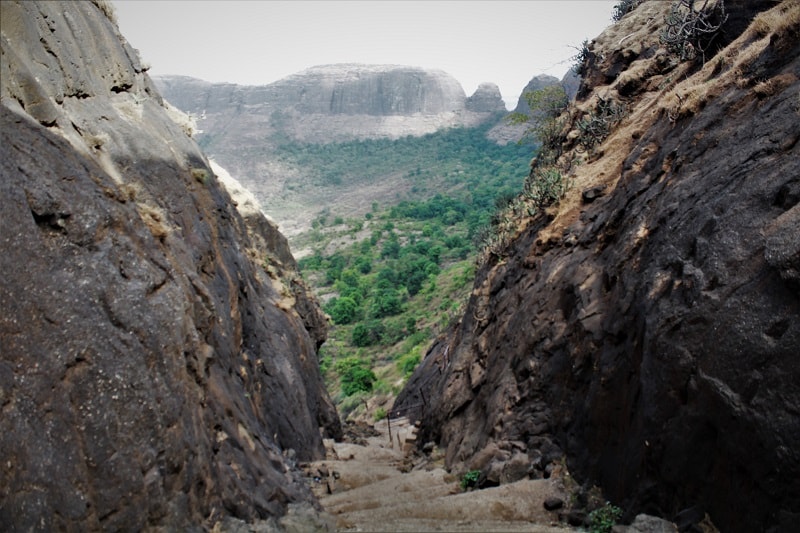 From the temple, the start point of Anjaneri Fort is little far (30 minutes of walk) and you can take the help of locals for directions. The initial climb consists of around 1000 stairs which are followed by scrambled paths. It was already 4 pm by the time I started with my trek and the guard at the entry point was surprised to see me traveling alone and carrying such heavy backpack. 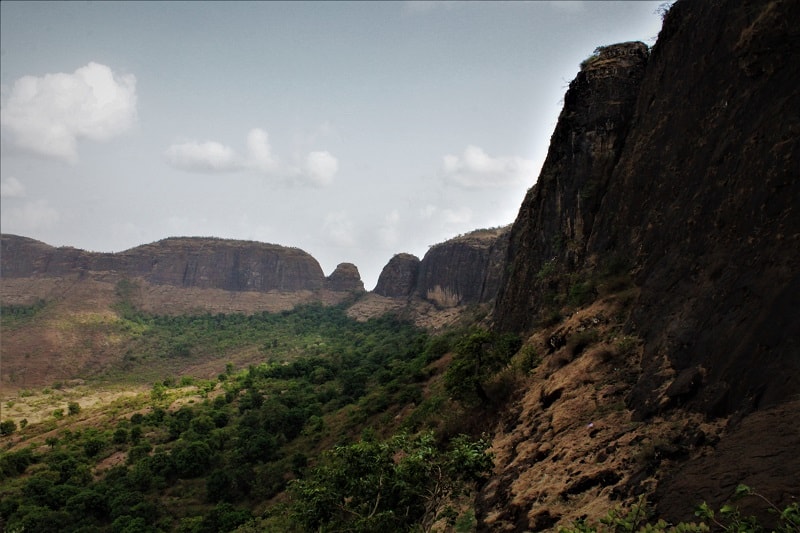 It seemed that he was about to stop me from doing the trek so late, but probably looking at my eagerness and fitness to do this trek, he asked me to carry on. Ha-Ha!! Though I was a bit tired as it was my second trek of the day, I had made up mind that I am only going to descend after making it to the spot where Lord Hanuman was born. I wasn’t surprised to be all alone on the mountain as I was doing the trek in the later part of the day and it was an offseason. That’s the perks of traveling in an offseason. Just before making it to the top, there is a small lake with a greenish color water. I couldn’t stop myself from clicking dozens of photos of this beautiful lake. 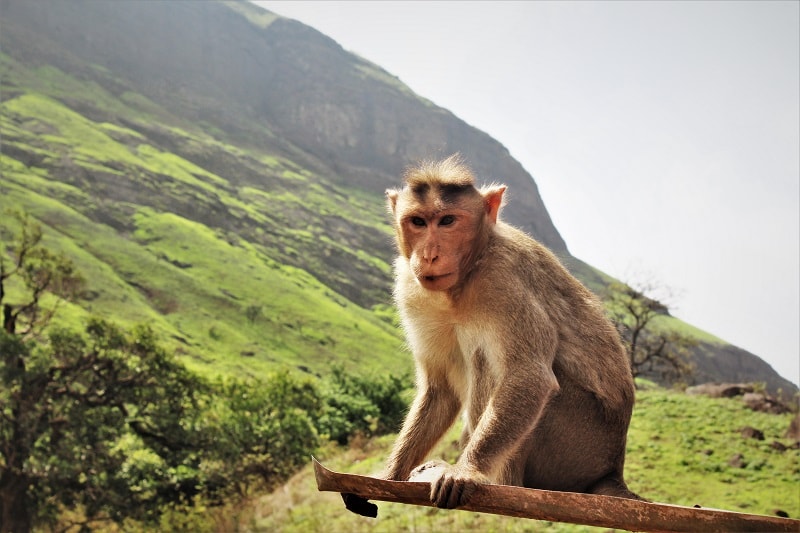 After around 2 hours of trekking, I finally made it to the top. There is a small temple at the top which is believed to be the birthplace of Lord Hanuman. After taking blessings at the temple, I decided to start with the descend right away as it was already getting dark. From the base of Anjaneri hill, I hitchhiked to reach Nashik. For day 2, the plan was to explore the major attractions of the Nashik city and visiting Sula Vineyards in later part of the day. Most of the places of interest in the town lie near to Panchavati area, which is the religious and holy place located on the northern part of river Godavari. I visited the Sita Gufaa, Shri Kalaram Mandir, Ramkund and the Shri Someshwar Mahadev Temple. It was an amazing experience to learn more about the culture of the city. 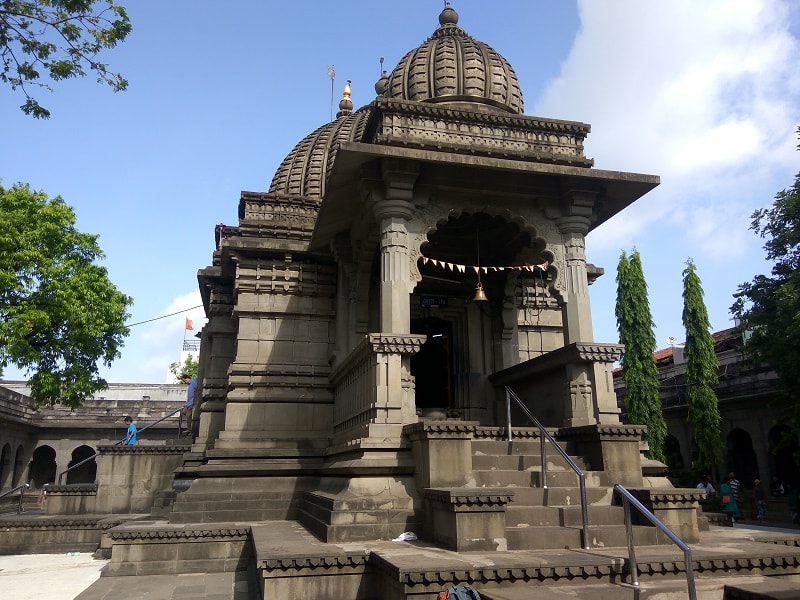 Due to lack of time or public transport availability, I couldn’t visit Dugarwadi Waterfall, Pandav Leni caves and Saptashrungi. Looking at the pictures of these places, I can make out that they all are worth a visit. If you have time, don’t miss visiting these spots!! 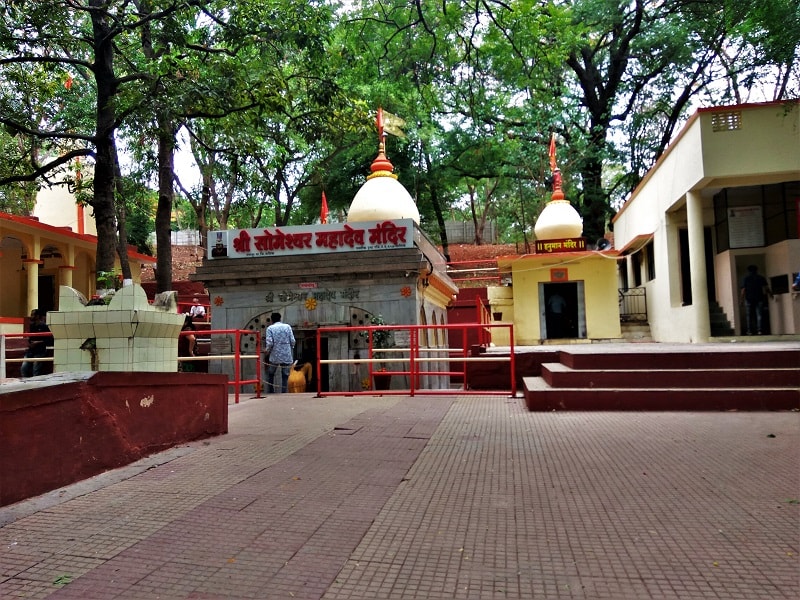 Though I visited the Nashik city in the first week of July, I would suggest my readers to visit the city in the months of August to December as the surroundings would be much greener and with climate being very pleasant. 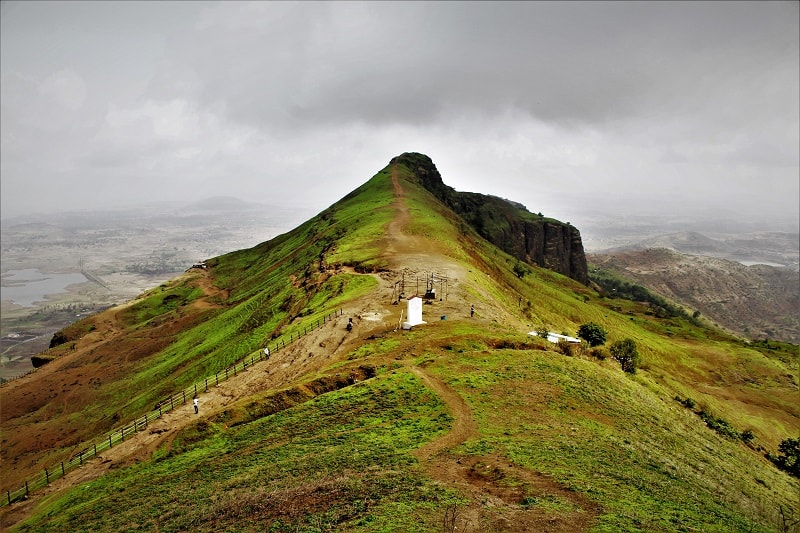 At top of Brahmagiri hill near Nashik city

Being a town which has so much to explore, I was very surprised to see fewer options of stay in Nashik city. After wandering around the streets of the main town for hours, I finally found a budget stay option “Shabeena lodge – 200 INR”. The room conditions were pathetic and I won’t recommend anyone to stay over there. 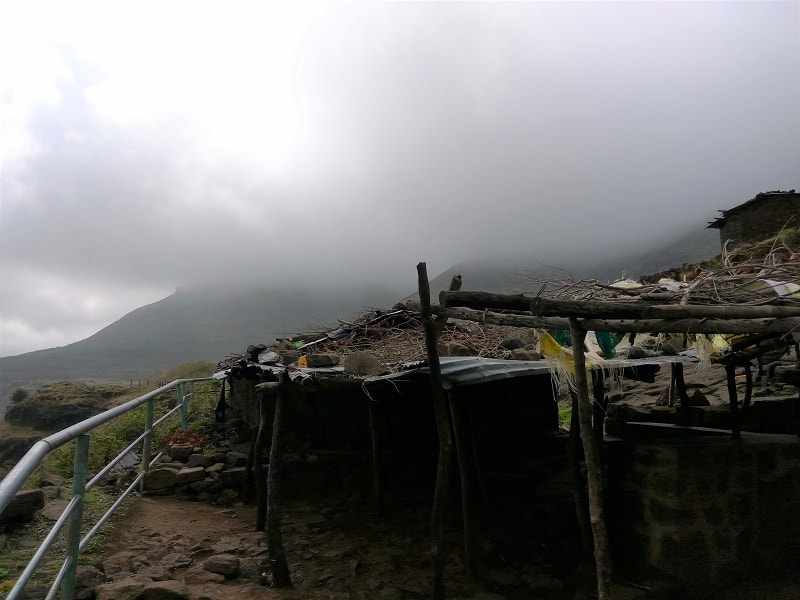 What you can do is explore Trimbakeshwar and Dugarwadi waterfall in a day and stay in Trimbakeshwar itself as it has a lot of better options. There is an ashram just next to bus stand at Trimbakeshwar where you may inquire. Also, the peaceful surroundings of the town will surely make you fall in love with every bit of your stay over there. Also you can pitch in tent anywhere on the Anjaneri and Brahmagiri Hill. The tent that I carry during the treks is Quechua Arpenaz 2 Tent. It has enough space for 2 people.

The shimmering water of the lake contrast magically with the swirling mountains. You can take hundreds of pictures and still not be able to do justice to the sheer beauty of this mesmerizing town. This city continues its shower of blessings on those who arrive here in search of inner sanctity, and I felt blessed too. While parting from this place, I felt the power of nature, the power to heal!! 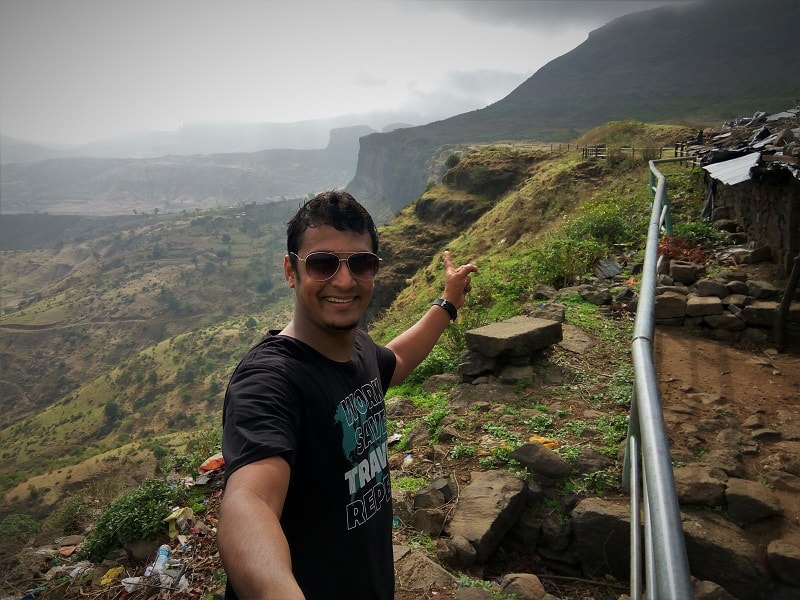 If you have an extra day or two with you and looking for some trekking near Nashik, I would highly recommend you to go to the Harihar Fort trek. You can read about the same on my post: Harihar Fort trek – Is it all about the rock cut staircase? 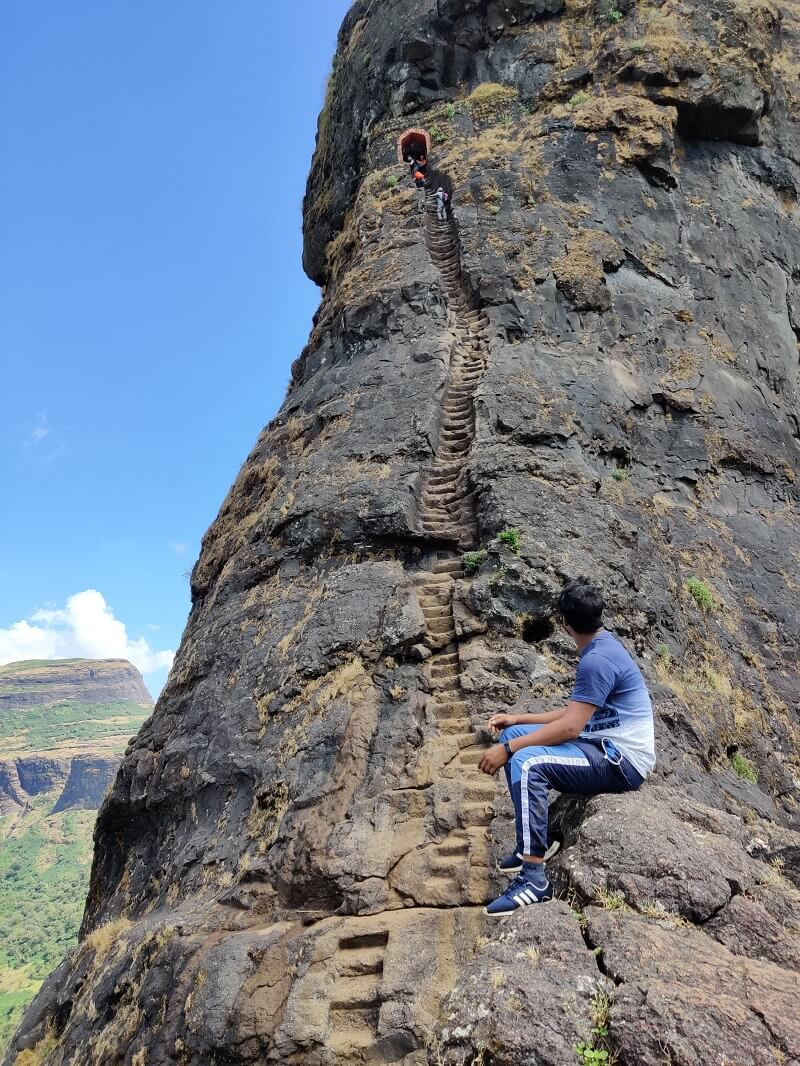 Hope you have enjoyed reading this blog post/travel guide on Nashik City. To get regular updates on upcoming budget blog posts from On a Cheap Trip, please subscribe by entering your name and E-mail address in the Newsletter below. You can follow me on Facebook, Instagram, Pinterest as well as on Twitter. 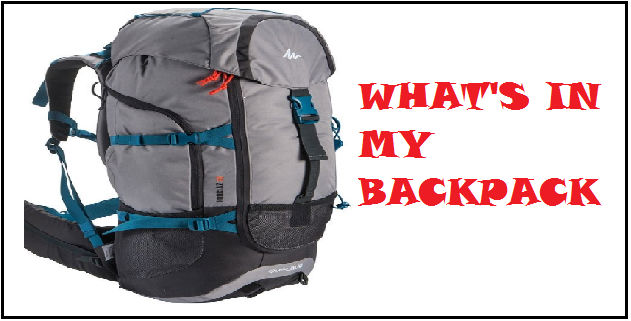