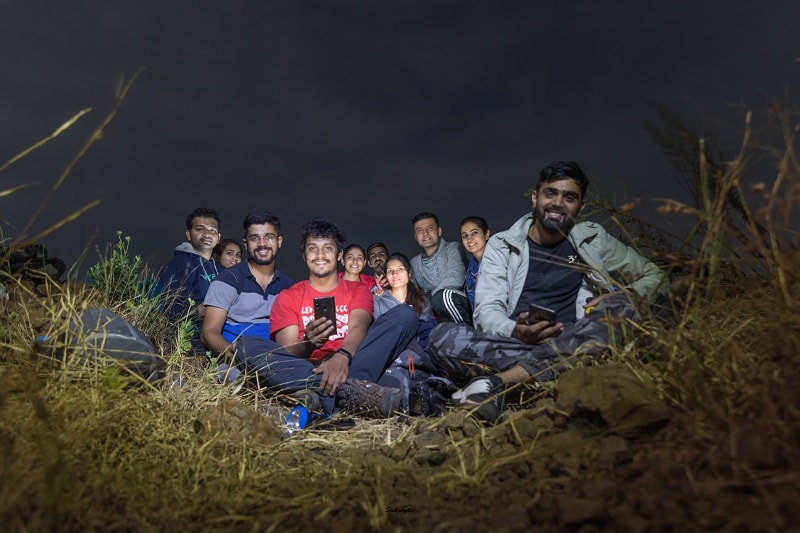 Katraj to Sinhagad night trek——-“Breathe the air and feel the sky, nothing else matters as your spirit flies”. With all these thoughts in my mind, I decided to organize Katraj to Sinhagad night trek. Punekar’s, most of you must have heard about it, yes I am talking about our so-called K2S trek. Abhi, are you crazy? How will you do it? Are you sure? You know it’s risky? You see that’s what you’ll ask yourself when you are going to take a risk not solely for yourself but with involving others in it. 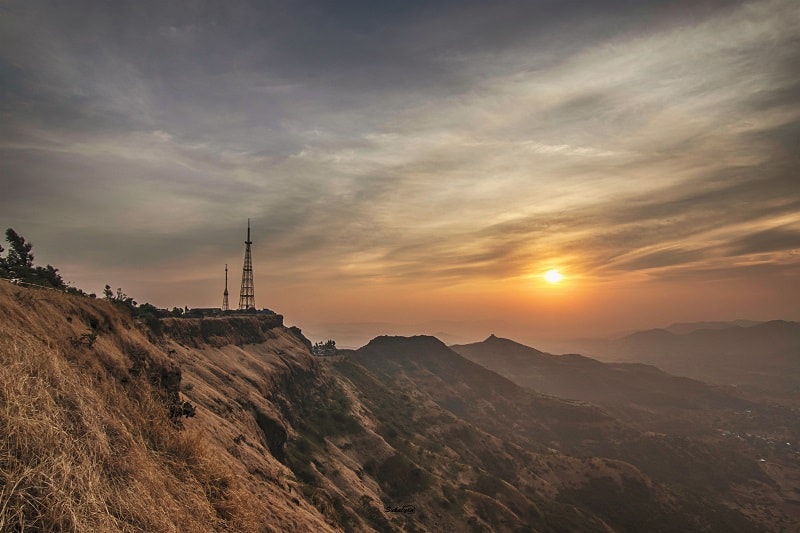 Being accompanied by 10 wonderful trekkers, this was a very special trek for me because for the first time ever, I was organizing a trek (free of cost). I had a difficult task in hand since it was a night trek and on top of that, I was unaware of the exact trail having not done the trek earlier myself. The only silver lining in all of this was the full moon shining brightly above us. It was like a guiding light in the darkness. 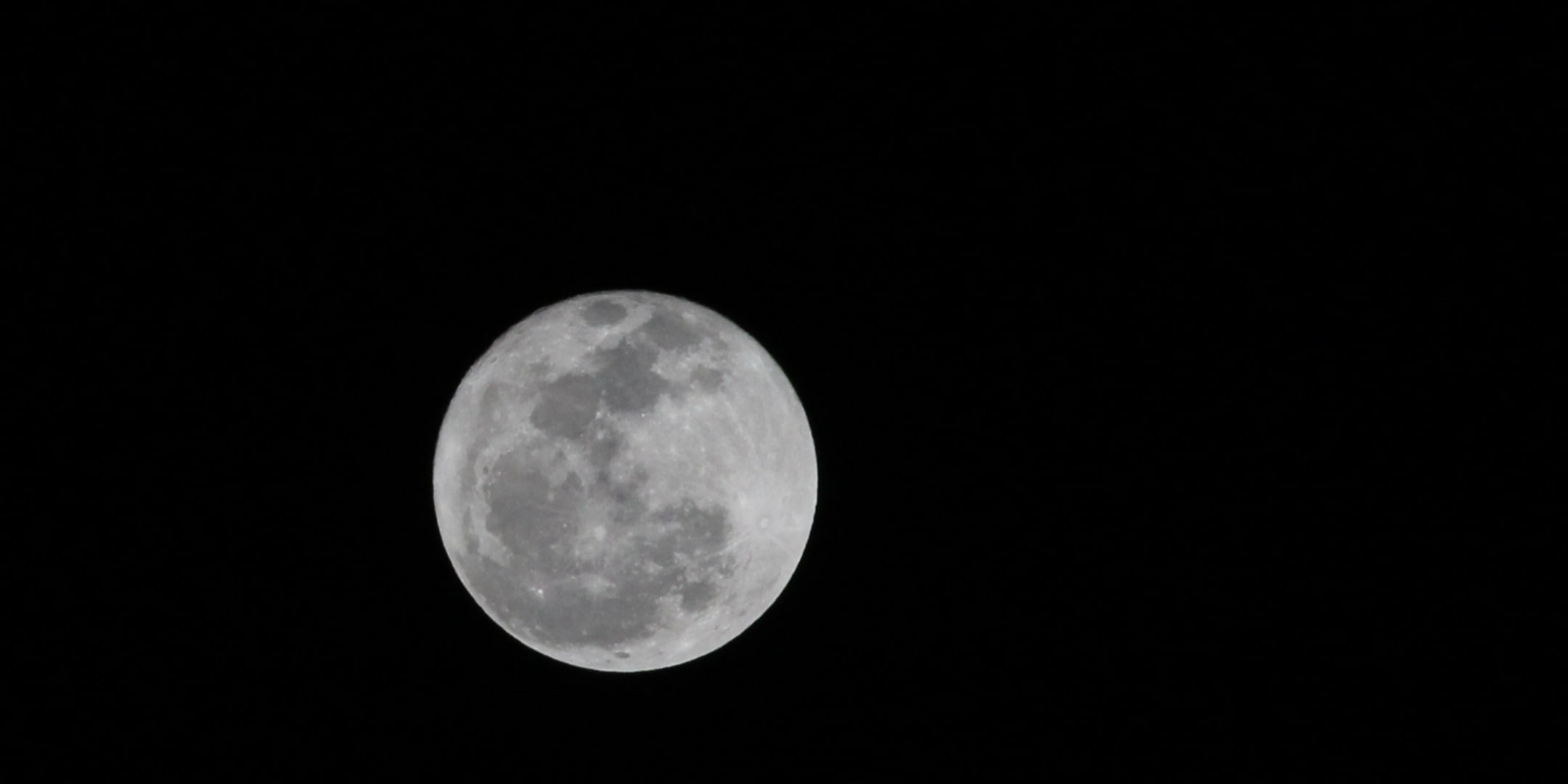 Starting from the Waghjai temple which is on a hill just next to the old Katraj tunnel, navigating through a series of 15 scenic mountains that leads to the popular destination i.e. the “Sinhagad Fort”, it is quite a challenging trek (around 16 kms) which will test an individual’s physical fitness, stamina and endurance. With the ease in accessibility from Pune, the trek is quite popular among the professional trekkers, amateurs and newbies. 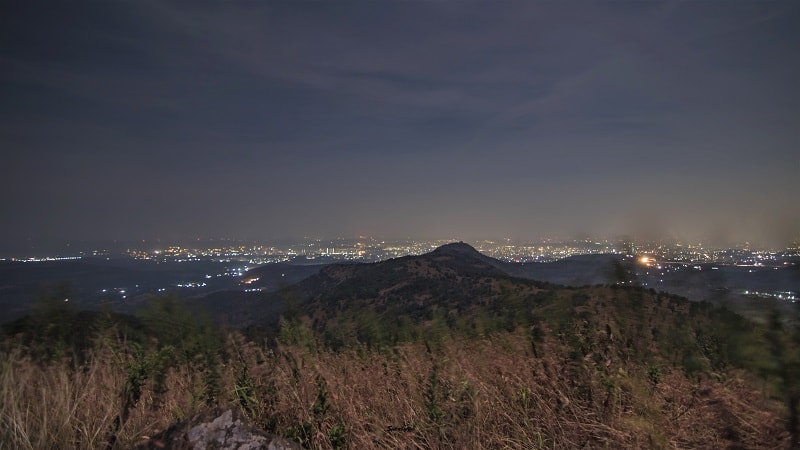 How to reach old Katraj tunnel (base of K2S trek)

Pune is well connected to other parts of the country via roadways and railways. Katraj, a suburb of Pune is well connected to the other parts of the main town via public transport. From Katraj bus depo, you can catch any bus plying via the old tunnel route and get down just at the exit of the tunnel. Another option is to catch a Tum-Tum (shared auto – INR 25) and ask the driver to drop you at the exit of the old tunnel.

Difficulty level of the Katraj to Sinhagad night trek

In terms of difficulty, I would rate K2S trek somewhere between moderate to difficult level. It generally takes around 6-9 hours to complete the trek depending on an individual’s fitness level.  Due to the loose gravel in a few patches, sometimes it becomes difficult to descend. So I would request everyone to be extra cautious in such patches!! In monsoon, the loose gravel won’t be there, but one needs to be careful of the slippery patches. 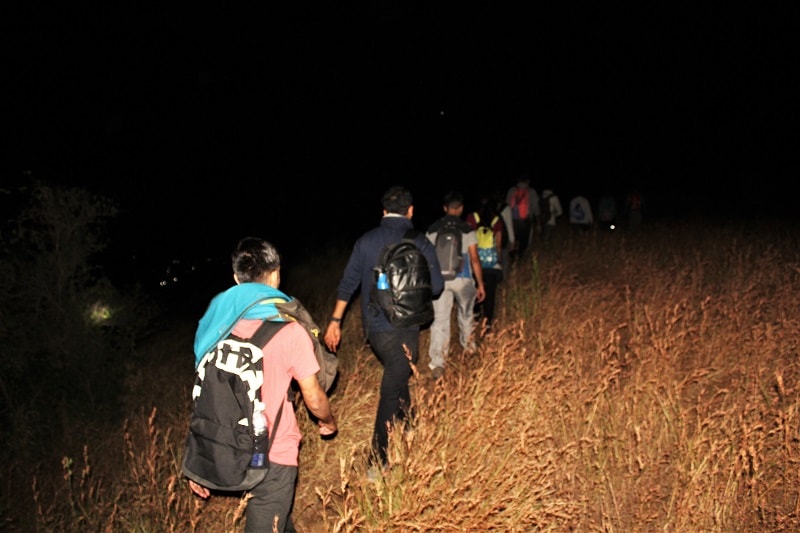 Group of wonderful trekkers on way to Sinhagad

My journey to Katraj to Sinhagad night trek

It all started by posting on Instagram that I was planning a night trek from Katraj to Sinhagad. Many of my followers and readers keep on asking to take them along with me on a trek. Owing to an upcoming Saturday full moon night, I thought it couldn’t have been a better time to organize my first ever trek. So I just posted that whosoever is interested to do the K2S night trek can ping me. I was astonished to see such a huge response. 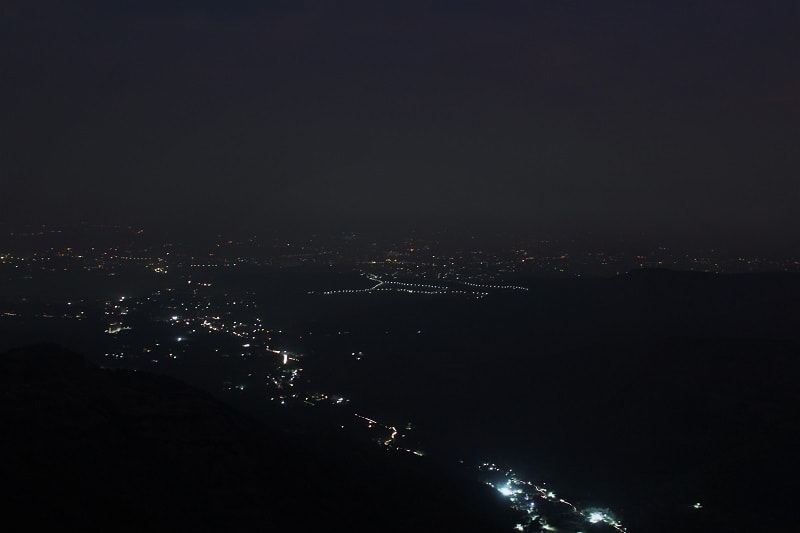 View from Sinhagad top at 5 am

The count of interested trekkers kept on increasing and finally when it reached 10, I said to myself that, it should be good enough. No more now, since I am organizing it for the first time. We all decided to meet at the Katraj bus depo by sharp 8:30 PM. I just wanted to make sure that we reach the base by the time when other groups going on the same trek had planned to start. The only reason being that I wasn’t familiar with the trek route!! 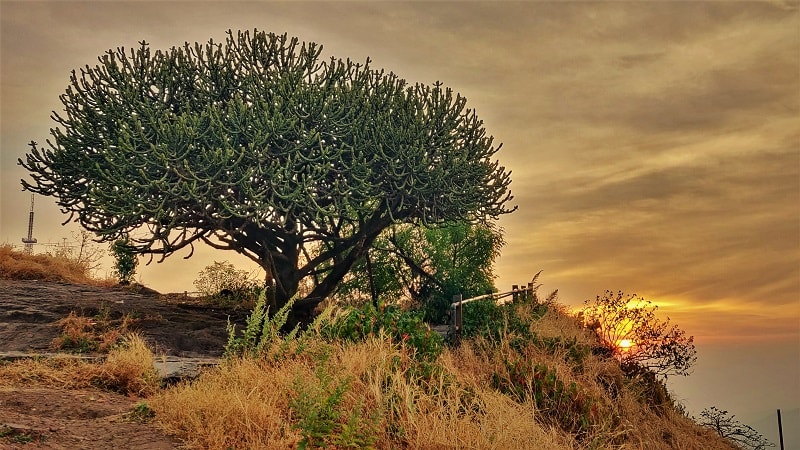 We took a tum-tum from Katraj and were at the base (old Katraj tunnel exit) by 9:00 pm. And yes, there were lots of groups who were about to start with the trek. At the start, you take a left (small hut is there) and follow the trail to reach Waghjai temple. After taking blessings at the temple, we were all set to begin our journey ahead. 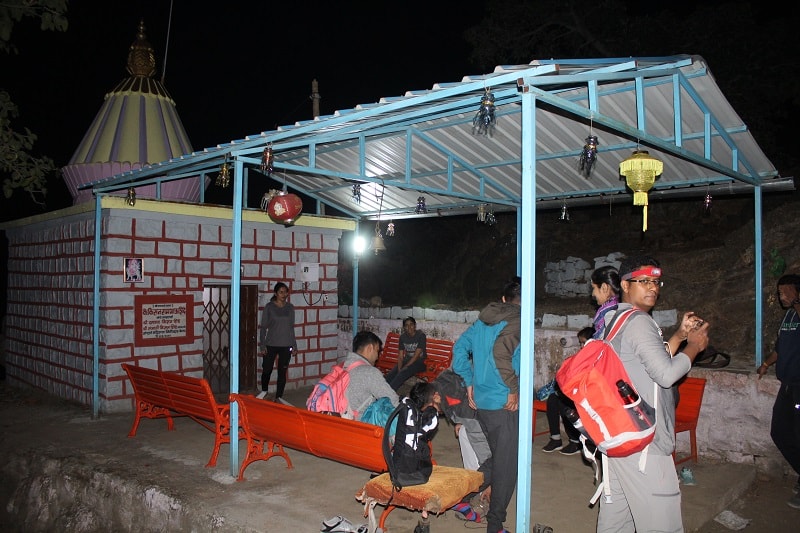 Waghjai temple – the starting point of Katraj to Sinhagad trek

From Waghjai temple, take few steps back again and turn to your right. Initial trail is a little confusing, but after passing the mountain over the new Katraj tunnel, one can see a blinking red light from a distance. That’s the light from the television tower installed at the top of Sinhagad Fort. This blinking light is your perfect guide all along the trail!! Also, Gmaps do have a trail marked, so you can take the assistance of it as well. 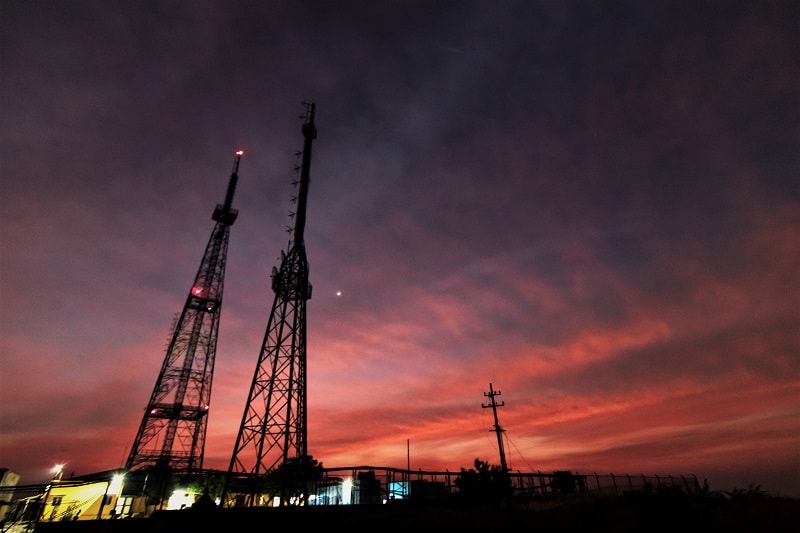 The moonlight in the dark sky welcomed us with open arms. It was due to this moonlight we were able to enjoy the views of the surrounding mountains and the deep valleys beneath them. I asked one of my friends to lead the group with myself being at the last to make sure that no one is left behind. Around halfway mark, we decided to have a dinner break. A full moon night atop a mountain, a cool breeze blowing across, tasty food and a group of enthusiastic trekkers. It was just the energizer that everybody needed. 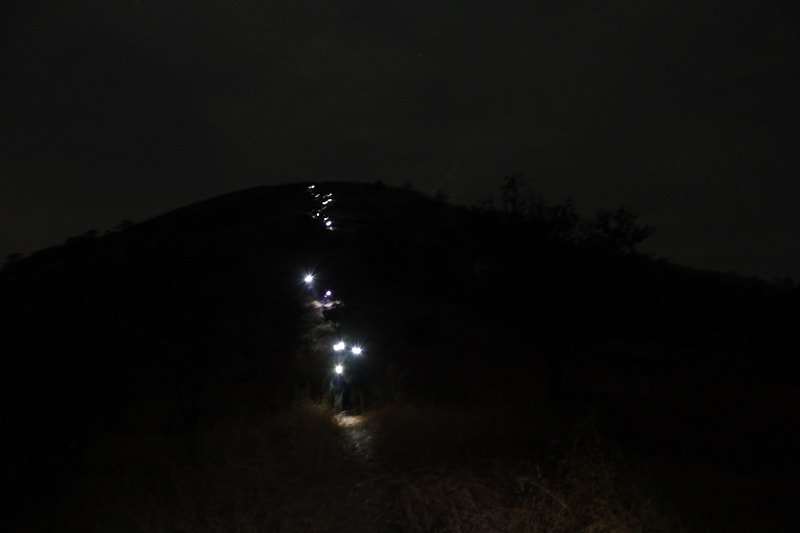 Headlamps and torches being used

We continued our journey further enjoying each other’s company, playing songs and sharing our previous trek experiences. Finally, we made it to the tar road (around 5 am), which is considered as the ending point of the trek. A further 3 km walk on the tar road will take you to the Sinhagad Fort entrance gate but we decided to hire a taxi for the same (INR 20/person).

Trekking for the whole night and walking almost 16 kms to cross those 15 mountains is not a joke. And I was pretty amazed to see the efforts which the whole group put in to complete the trek. 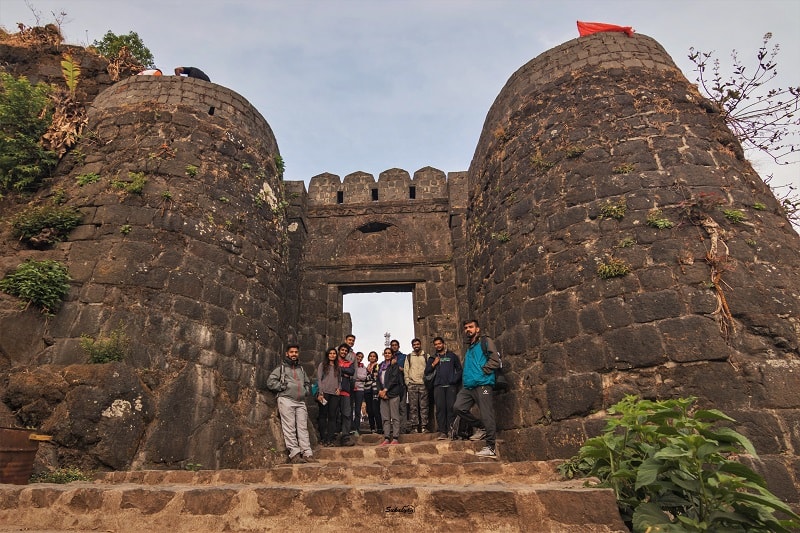 11 of us at Sinhagad Fort

The views of the sunrise which we were greeted with from the top of Sinhagad fort made all the efforts worth it. The dusky body of mother earth seemed like a flowing river of gold. The sun was reflecting all the beauty that the land holds.  Especially the hues in the sky just before the sunrise were magnetic. After having breakfast at the fort, we decided to put an end to the exciting trek. The same taxi guy dropped us (INR 50/person) to a village from where we took the bus for Katraj. 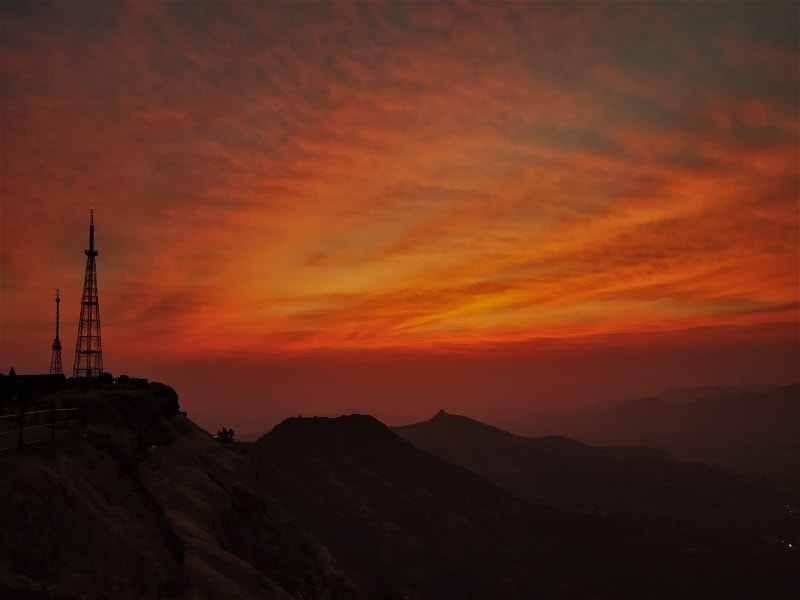 I was happy to have organized a trek successfully and hope to organize a few more in the near future!! Thanks everyone who was the part of this adventurous trek. You guys were just superb!! 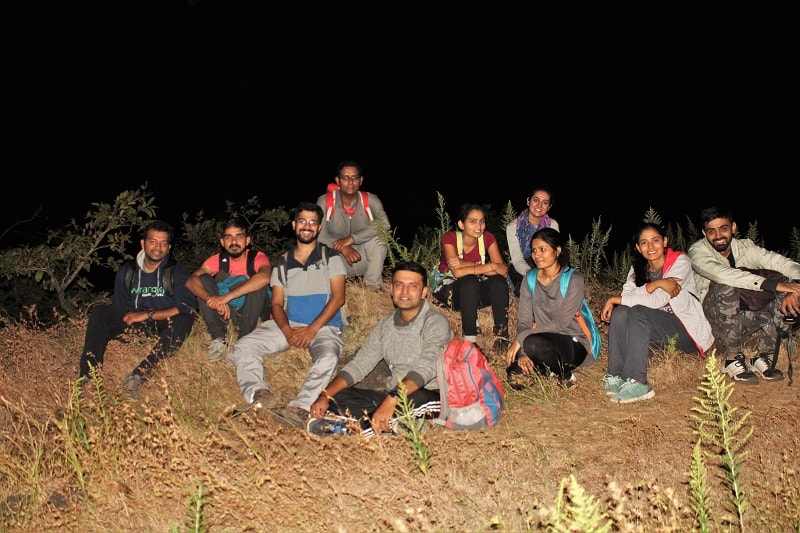 Thank you for being part of this trek

If you are planning to do this trek overnight, any time of the year is fine. In monsoon, one may experience the foggy conditions and the lush green surroundings. In winter nights are chilly especially in the mountain regions so be prepared. 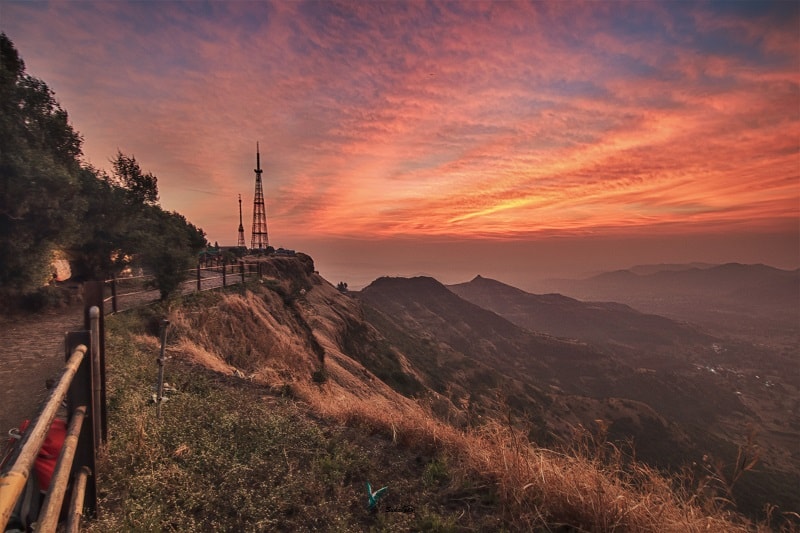 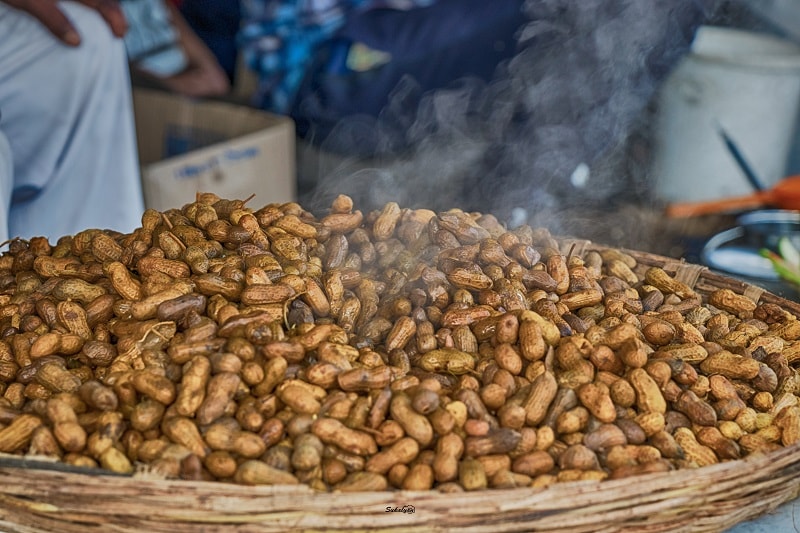 For stay you can pitch in tent anywhere on the mountain. The tent which I use is Quechua Arpenaz 2 Tent. It has enough space for 2 people.

The sun watches what I do but the moon knows all the secret. I have always been a moon lover. My heart becomes fearful of the night and every now and then, I seek to witness the beauty of moonlight. It guides me toward my destination. For this time, it led me to the beautiful Sinhagad “The lion’s Fort” which speaks about the Battle of Sinhagad that was fought on this land followed by the glory that was created by Marathas. This land tells the story of valour and pride. Go and seek. After all, who said nights are only to sleep? 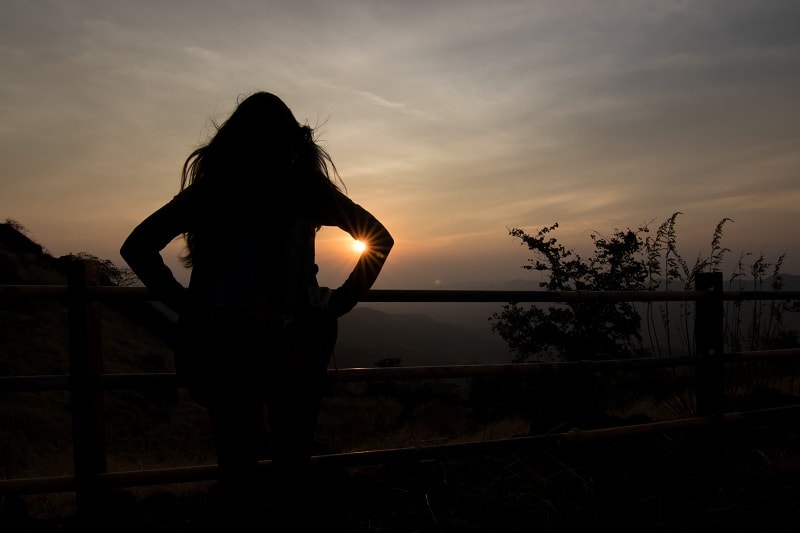 If you are doing a night trek, do carry a torch along. The one I would recommend is: amiciVision Metal LED Torch Flashlight